Yesterday morning I went to the post office to send a package off and thought I'd enquire about the parcel I was waiting for.  Nothing for me though, they said nothing before Monday now!
However, a couple of hours later I was chatting in the street with my neighbour when I noticed a guy coming up the hill carrying a parcel! And yes, it was for me....it was Enyo, my lovely little Engendrito from Irrealdolls here in Spain.  She was 'special' enough that she came by Courier and not via the post office!!

For those not familiar with these little creatures, they are described as thus on the Irrealdolls website:

....little creatures that live in our homes but we can't see them!
They used to wear skins (from animals or sinthetic), with ears and tail included, like if they were plushies or savage creatures.
Engendritos don't like humans behavior, because of that, only very strange people can see them.
For unknow reasons, their names are from butterflies or moths. For example, the Enyo name comes from “Enyo Lugubris” a non very beautiful moth...


Well my little Enyo has become human!  She is a sweet and lively little girl with wild chestunt brown hair which she keeps styled in two plaits and deep nut brown eyes.  And her name is Ilya-Anis.....Her name came to me yesterday....I looked at the date, 11th November 2011 and thought "now how can I come up with a name that reminds me of the date when she arrived?  So I thought well capital 'I' and then lower case 'L' look like the number 11, so something starting with those two letters....immediately Ilya sprung to mind.  However I also wanted something 'Spanish' included in there somewhere to reflect, not only where she lives but also where she was designed!  So 'Anis' was added.....Anis is a aniseed flavoured drink that is very popular here in Spain.  So Ilya-Anis was 'born'!!!!!
I feel very fortunate to have her because Laura only releases batches of 50 each time and this is the second batch, so she is very limited.
Anyway I'm really happy with her.  I did do a bit of work on her when she arrived as the elastic was quite thin and floppy, so I restrung her,  hot glue sueded her joints, added freckles across her nose and cheeks, a bit of extra blush on her cheeks and ears, gave her eyelashes.....a wig and of course a little outfit that I made especially for her last weekend in anticipation of her arrival!  And Voila, here she is, little Ilya-Anis: 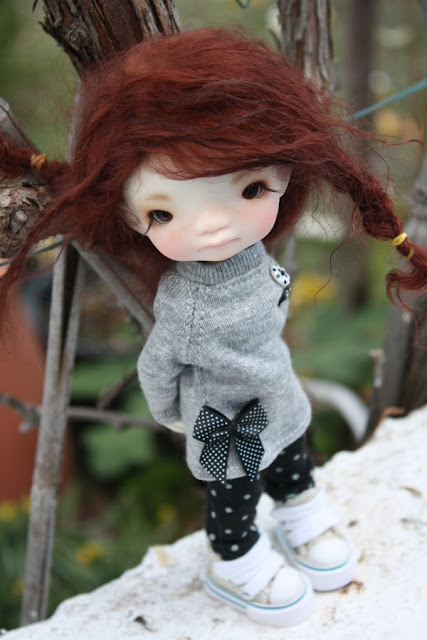 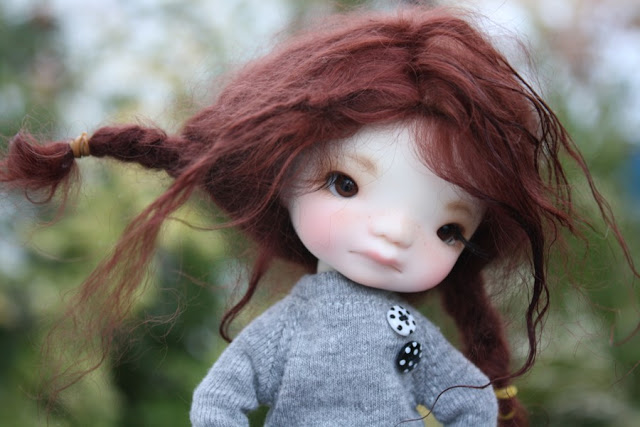 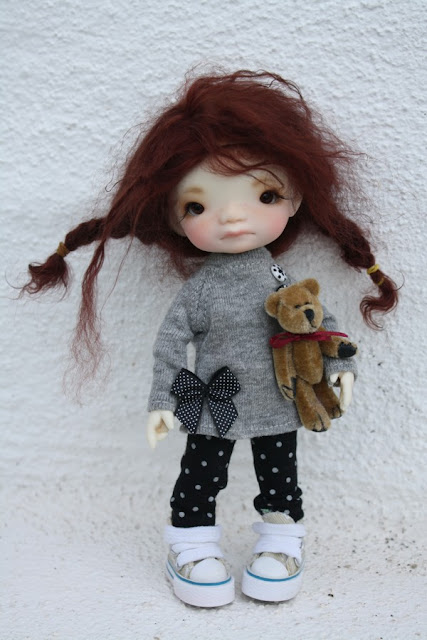 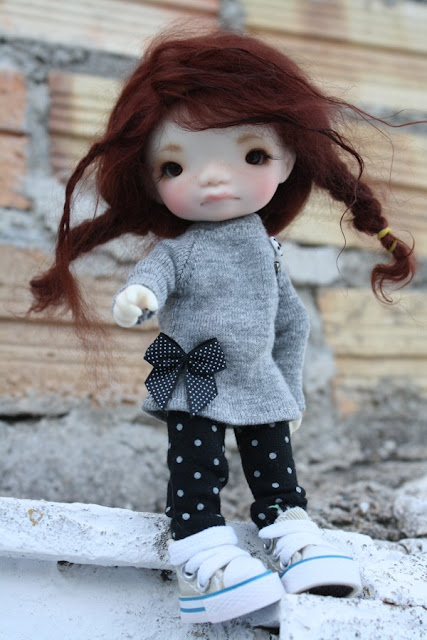