The past week brought some great dolly activity here in Spain and so I thought I'd share with you on my blog.

Firstly I made some overall sets for the Wichtel dolls and as you'll have seen on the previous post, the first set sold immediately....then so did the second set, even as I was cutting the last few threads! ;)  So both those sets are going to live in the US on Monday.  Here is the second set: 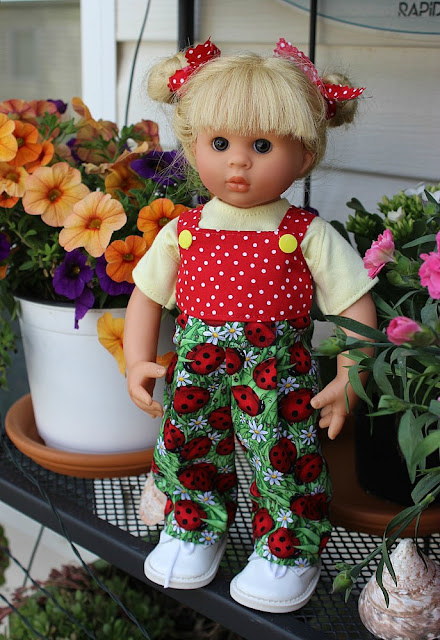 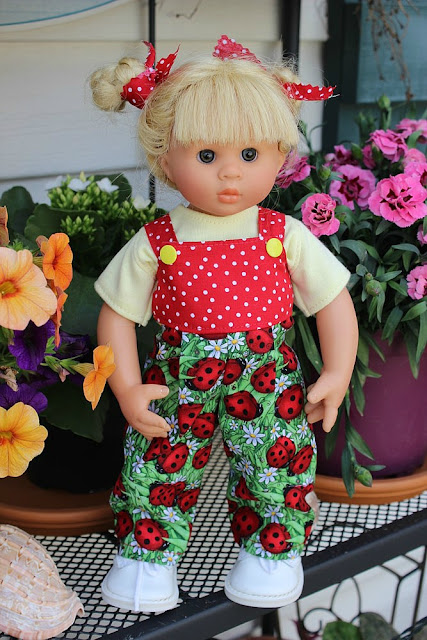 I think I prefer working this way, making something and then (hopefully) selling, rather than having a commission list as it makes me feel less pressurised.  I can also sew for the dolls I want to rather than those I have to.

Next I received a couple of very cute dresses in the post from a lady in the Netherlands who sells under the name Hello Blue Hare on Etsy.  The dresses are meant for Blythe but I knew that Sam, my little Elfdoll Hana Angel would be itching to get her hands on them when they arrived, and I wasn't wrong!  Here she is modelling one of them today when she took her skateboard out for the first time this year!!!  (Tights and boots are both for Blythe, hat is old now but was made by an ebay seamstress for a Lati Yellow doll, sunglasses are from Robert Tonner for Sindy, skateboard is one of those fingerboards from the local toyshop!).  I love that Sam is able to wear Blythe outfits so well now that she has a Jerry Berry resin body. 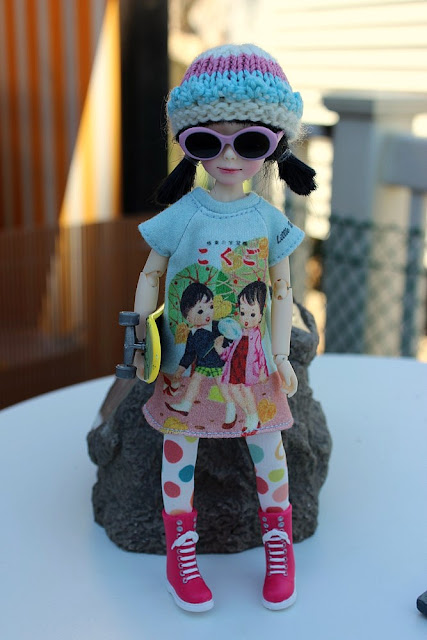 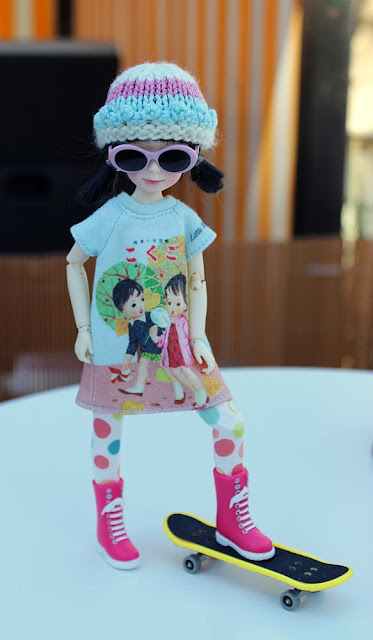 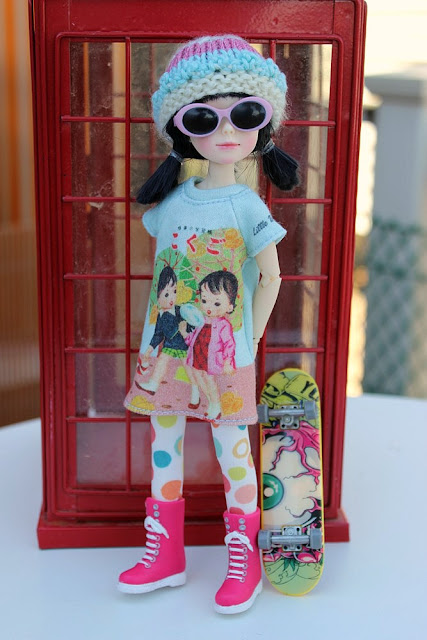 And finally, I have mentioned before on here that I wanted a new faceup for my tanned Little Fee Ante as I'd not been over keen on her Fairyland default face.  It wasn't that the faceup was ugly, not even remotely, but the shine under the bottom eyelashes and around the mouth just bugged me.  So I asked an old friend of mine, Olga, who customises Blythes under the name Vainilladolly, if she would give her a new faceup for me.  I visited with Olga yesterday and she has made my girl look absolutely gorgeous!!!  I'm sure you will agree!  And as well as that, Ante, who was previously called Marisol, now has a new name!  From now on she will be called Tyrone!  I know it's generally thought of as a boy's name but I love boyish names for my girls :)   I also made her a new smocked top especially to celebrate her new look!

I apologise in advance for the profusion of photos but I couldn't resist sharing her sweet face and couldn't then decide on which were my favourites!!!! 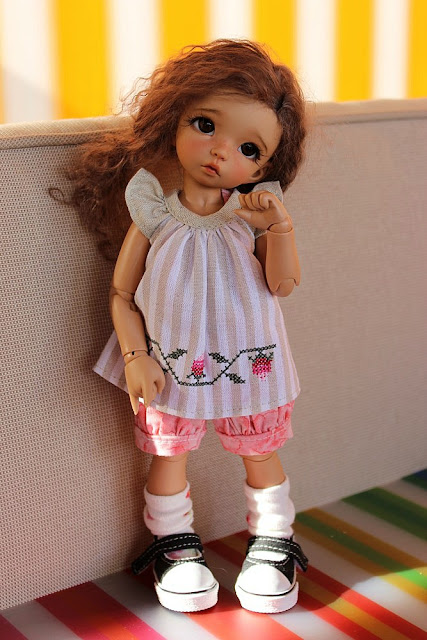 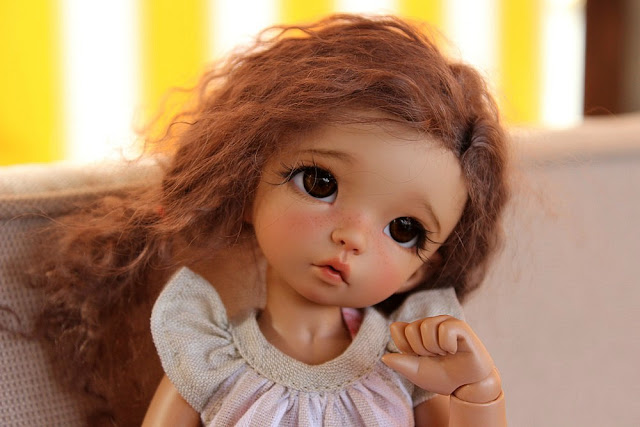 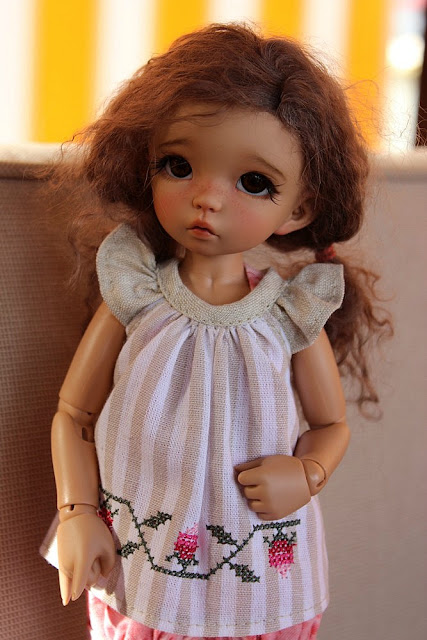 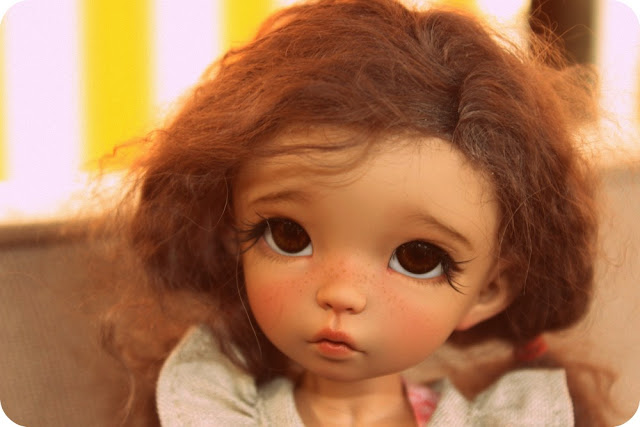 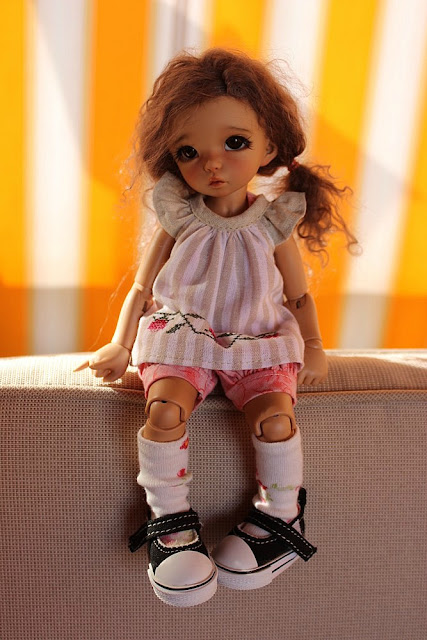 In this photo Tyrone was fed up with all the photos and wanted to get back outside in the sunshine to play!!   "Just a few more sweetie!" 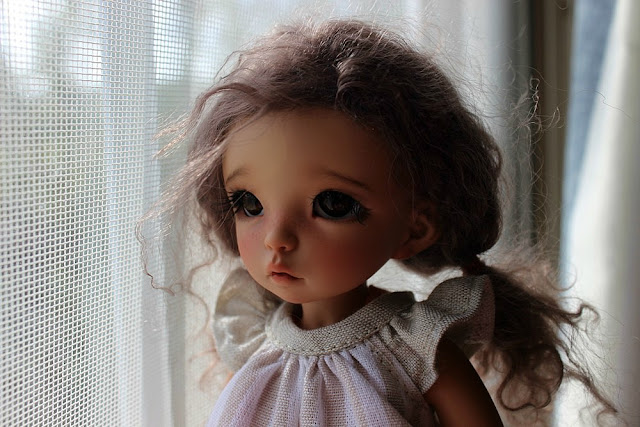 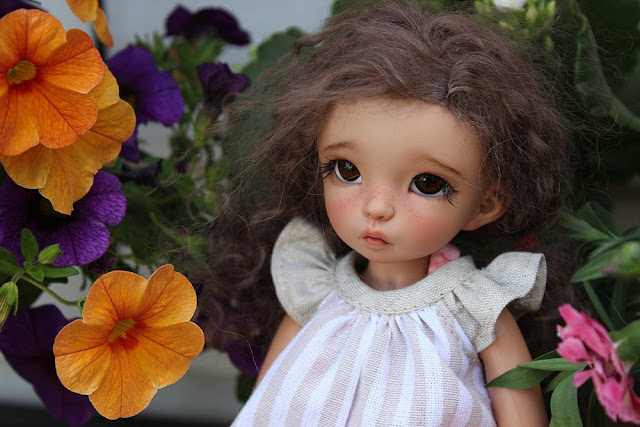 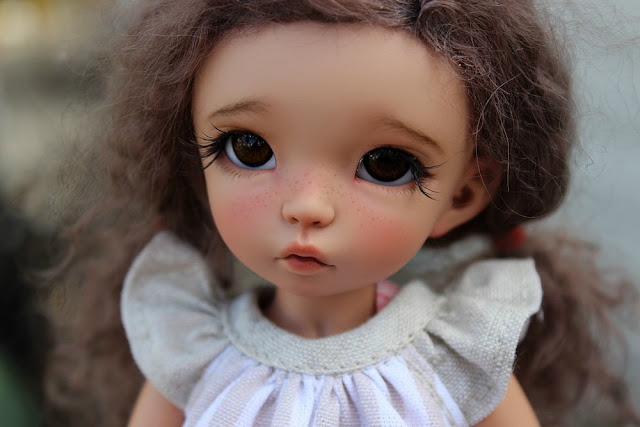 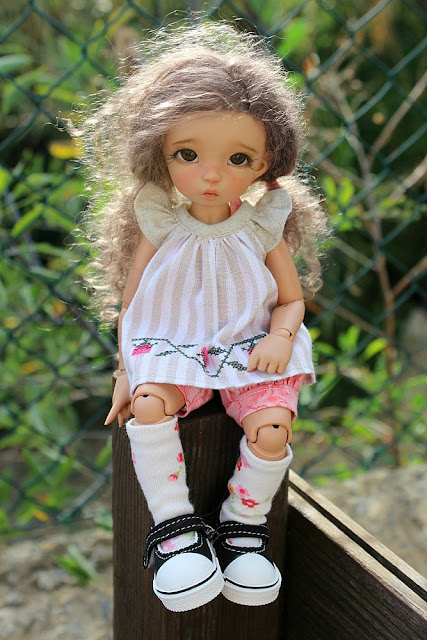 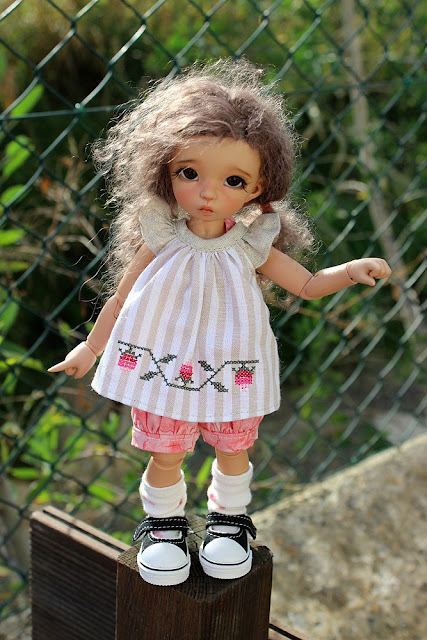 "Be careful Tyrone!  I think you're getting a little bit too daring!"   (Little Fees really are the BEST posers!) 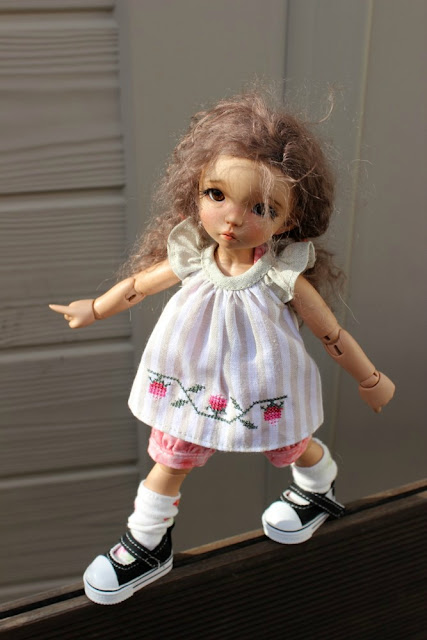 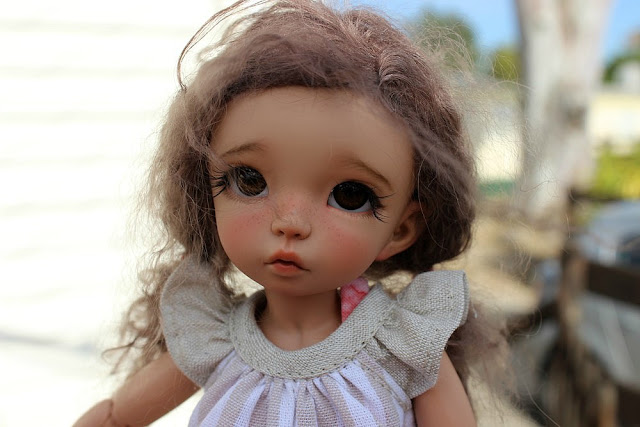 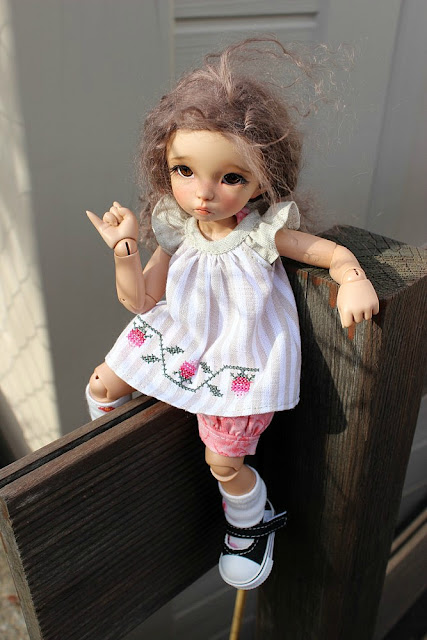 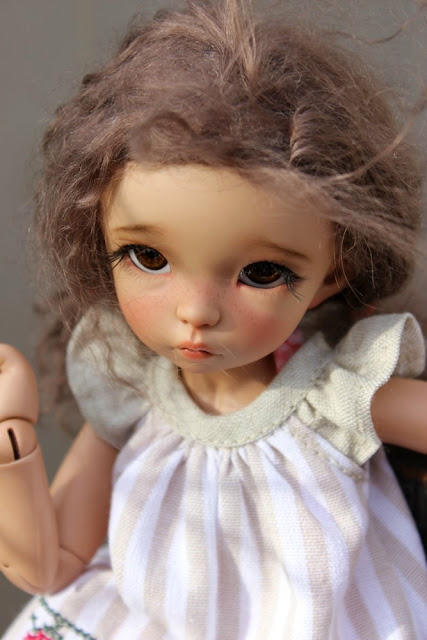 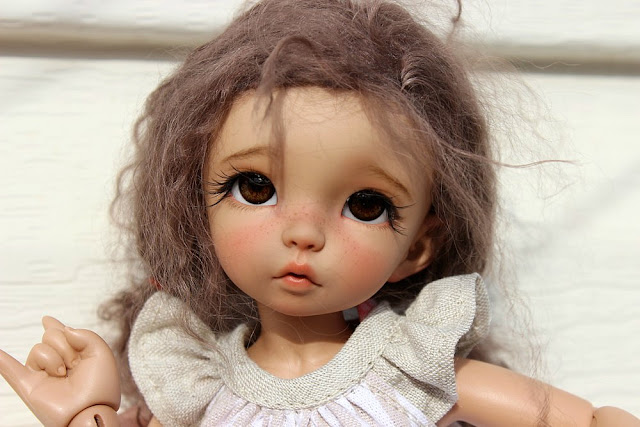 I know I'm prejudiced but isn't she beautiful!  I love Olga's faceups, her and Ravendolls are my very favourite faceup artists :)  It was also great being able to enjoy some dolly chat with Olga and share a smoothie in the sunshine!!

So that has been my dolly week!  I hope you've enjoyed reading about it and hope that you all have a great weekend and that the coming week is also good for you!!