I put one of my dolls up for sale this week because she gets barely any attention and I've sort of got to the point where, unless a doll means a whole lot to me, if she (or he) doesn't get any attention, then they are going to go.  I just feel that they are too expensive to just stand around doing nothing but gathering dust.
So my Dollstown Ganga was put on the Den of Angels marketplace for sale......I added that I'd be interested in trading too, because I still find it exciting what might be offered as a possible trade!
I had a flurry of interest in her but no immediate takers.  One lady wanted a boy body....couldn't help there as my Ganga is definitely a girl.  Another person wanted to trade for a big SD13 girl but I have enough with two Super Dollfie sized girls and didn't want another.  Then a very nice lady from the UK sent me a list of dolls she's looking to rehome and one of them caught my eye.  A light tanned Narae by Bimong with custom faceup by Caroline of Viridian House!  I was very curious as several years back I had a pinky white Narae and really loved her, but being French resin she quickly yellowed and I decided to sell her before she got any worse.  I did have some regrets about selling her, but time moves on and so does my dolly collection.  So I decided to ask the possible 'tradee' for more information and photos, which she duly sent and now we are going to trade.
I was a little worried at first because the 'tradee' isn't sure if the doll is French resin or not but she certainly doesn't seem to have any yellowing at the moment, and she is about 4 years old.  She's been kept in a box for a couple of years and I will keep her in my darkened dolly/sewing room, so hopefully if she is French resin, the process of discolouration will be lessened with good care.  I'm quite excited to be getting her now, as she'll fit in much better with my collection than Ganga did.  Ganga is a great doll but with the DT7 body she is soooo much larger and bigger built than my other MSDs that there was no way she could be posed with them, she just looked all wrong, so she was a bit of a stand alone sort of doll.  Whereas Narae will look great with the Unoas, and the Iplehouse girls, I'm hoping!  And an added bonus she's coming from the UK so no customs fees!!! Yeaaaahhh!!

Apart from that, I took some photos of my little Kieran (Puki Fee Bonnie) yesterday, wearing a very nice little sailor dress which I bought on Etsy.  I'm going to get her a new wig because although I like the colour of the red on her, the style of the blond (below) is much nicer.  I think I'll got to Facets by Marcia and order a couple of Monique Gold Jojo's and cut them as I've cut the blond one below.....isn't she a cute little girl! 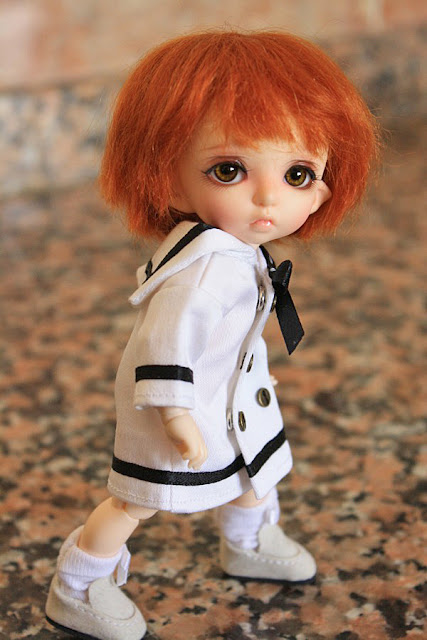 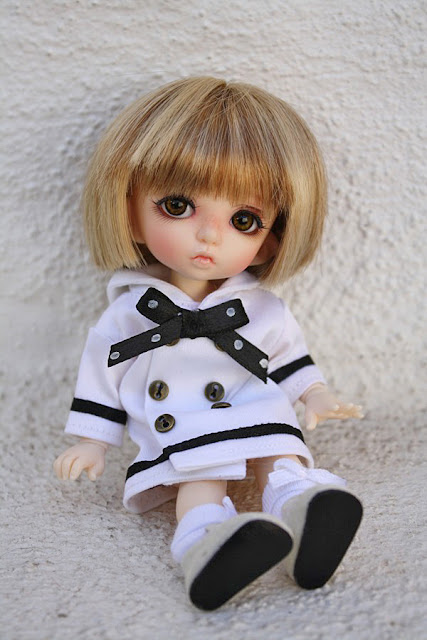