I'm a little late with my New Year greetings as whilst my mum and brother were over here from the UK I didn't manage to get on-line much, but still wanted to post an 'overview' of last year and wish all my readers a very Happy New Year!

Firstly I would like to thank those people that have commissioned me to either sew for their dolls, or do dolly makeovers for them in the last year.  My list has been (and still is)   incredibly long and sometimes the wait has been as much as 8 months....I hope that people have felt the wait was worth it!  I wish that I could work quicker but sometimes 'real life' just gets in the way.  Some people have said to me that perhaps I should close my commissions list when I reach a certain number of names, or maybe limit the number of outfits that a person can order at any one time, but to be honest, when a person has waited months to reach the top of my list, to then tell them that they can only have 'x' number of items seems a bit mean.  However I am constantly trying to think of ways to shorten the wait time, so maybe in time I will come up with an idea that works better for everyone.  Anyway, thank you so much for your patience and continued interest in my work.

On the dolly front I've had a fair few 'ins and outs' this year!  Several of my dolls moved on to new homes, and I got my BJD numbers right down, however, my interest in BJDs was piqued again with the arrival of Reira by Atelier Momoni, a lovely doll sculpted by the Spanish artist Lola Palacios. 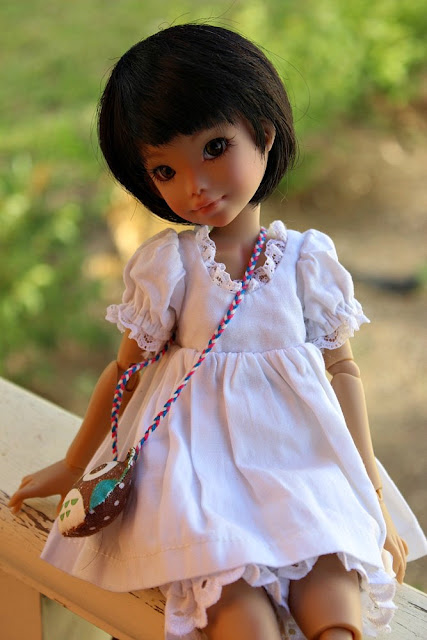 Although Reira had the cutest face, and her quality was excellent,  her more mature body wasn't for me and a couple of months ago she went to live in France with a new mum.  However, I received my lovely tanned Fairyland Ante in June for my birthday and am very very pleased with her.  She took a while to find a name and a wig that suited her, but now she is just perfect! 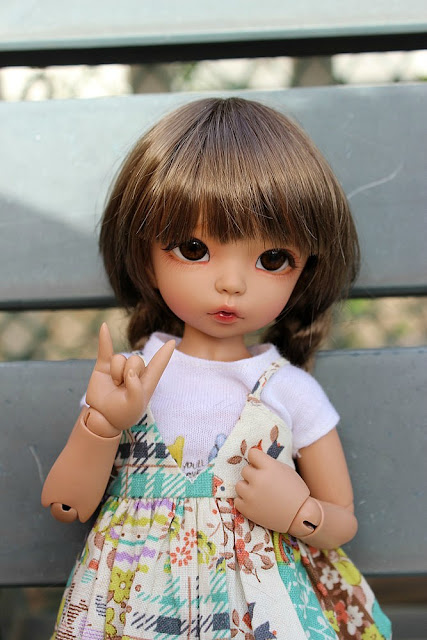 And next came little Valentine, my tanned Secretdoll Person #21.  She came to live her from her previous home in France, and has settled in well.  She's a grumpy little thing but I just love how expressive her face is! 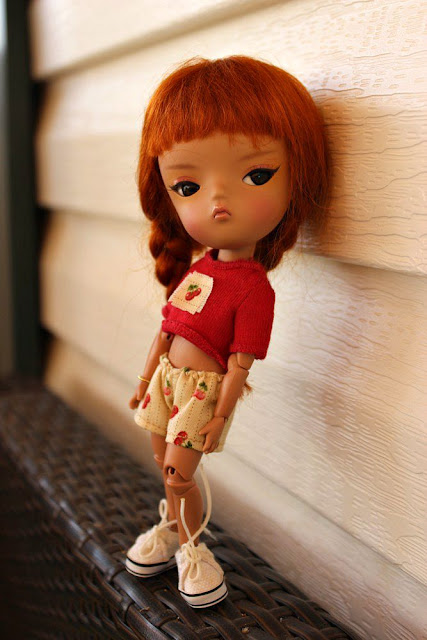 The last edition to my BJD family in 2015 was Bordie, an Iplehouse BID Brody in 'special real skin'...Brodie has proved to be a hit with many people and several people have ordered one like her for themselves!!!  Here is my girl wearing a wig I made for her. 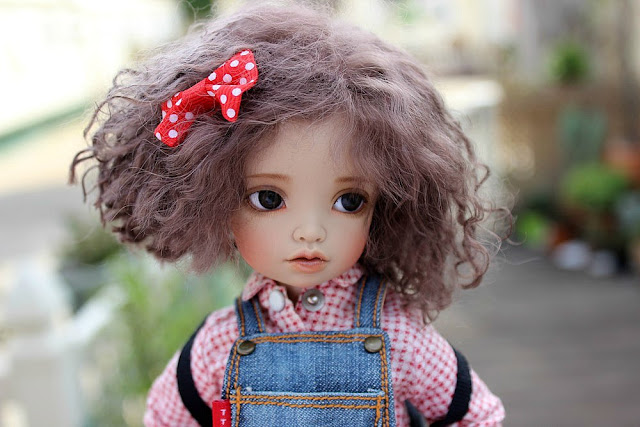 I do have one more BJD on her way to me as I type but I won't give any details of her until she arrives safely and settles in!!

I added four Sasha's to my dolly family this year too.  Well in theory I suppose we could say 5,  but because the No Navel I bought wasn't for me, I traded her and she went to live with Jenni in Wales, whilst Teddy, a Goetz Toddler Erik, came to live here in March.  He is such a cutie and fits right in with the other Sasha kids! 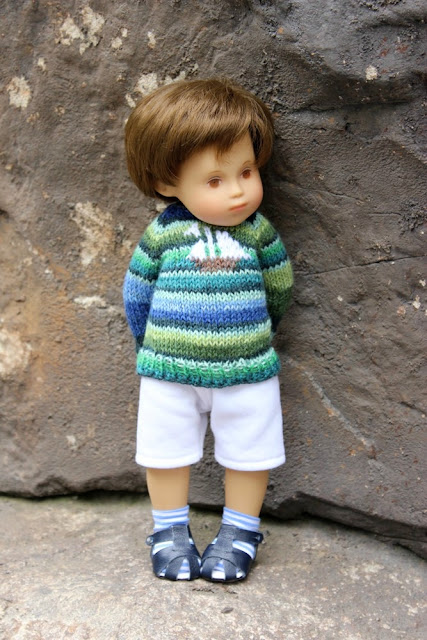 The very same month, having moaned that babies just weren't for me, I took the plunge and bought a Brunette early 70's baby from Ebay.  She is very cute but seriously neglected here, and may be looking for a new home in a few weeks.  It's such a shame because she's really in great condition with matt face and non falling hair, but I will repeat it again, babies just aren't for me!!!! 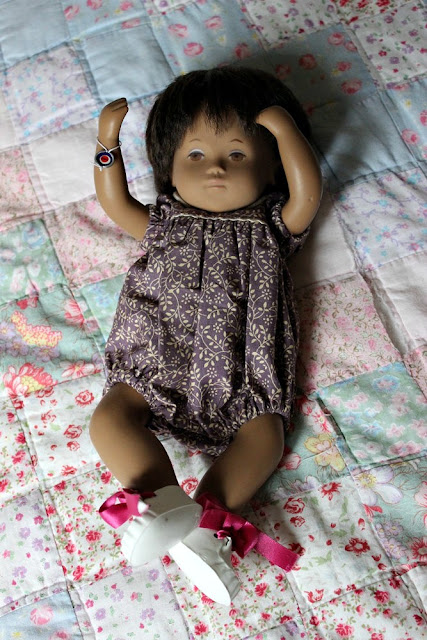 In April I spotted this lovely 1969 blond Sasha on Shelly's website and fell in love with her beautiful face, so brought her home to live with me.  Her hair was a little bit dry on the ends so I decided to cut it into a long bob, and named her Skye.  Here she is on the beach, she takes after me and is never happier than when she's near the sea! 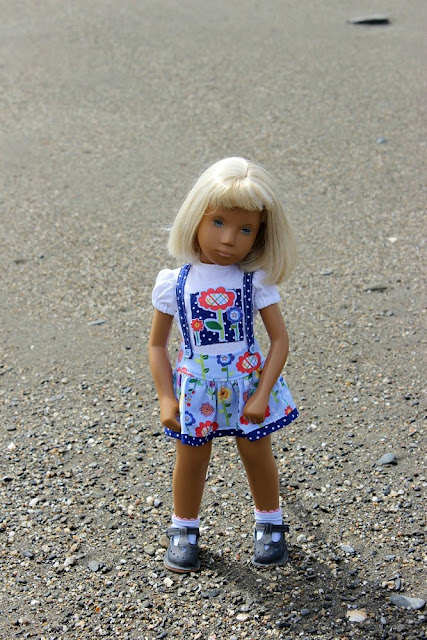 And finally this year I added a Cora to my Sasha family.  She is lovely but I'm ashamed to say that so far I've hardly done a thing with her since she arrived here in May.  I will try to rectify that this year!  Here she is with Teddy, he absolutely adores her! 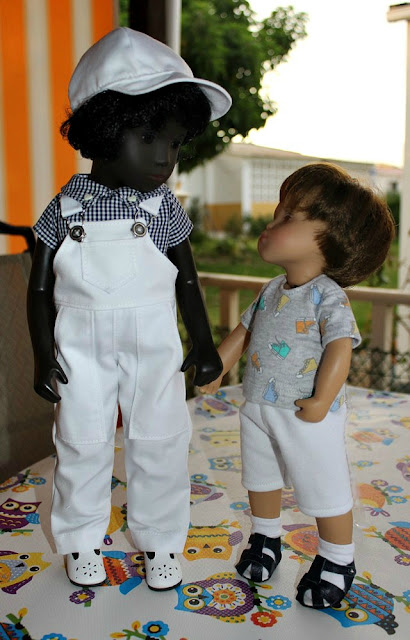 I've had several new additions to my Little Darlings family this year .... I started the year with Ellie, my first Little Darling, going back to Dianna Effner to have her eyes repainted....she had a bit of a journey back and finally arrived home again some three and a half months after she left!  It was a stressful and worrying time for me, especially having to deal with Spanish customs who wanted to charge me for importing her back into the country, but I stood my ground and in the end, having held her for some 6 weeks, they finally only charged me the admin fees!  (Funny that because it was me doing all the 'admin' work, but there you go!)  So Ellie got newly painted eyes and it was lovely to have her home again!

Here she is on her 'homecoming day', the other girls threw a party for her! 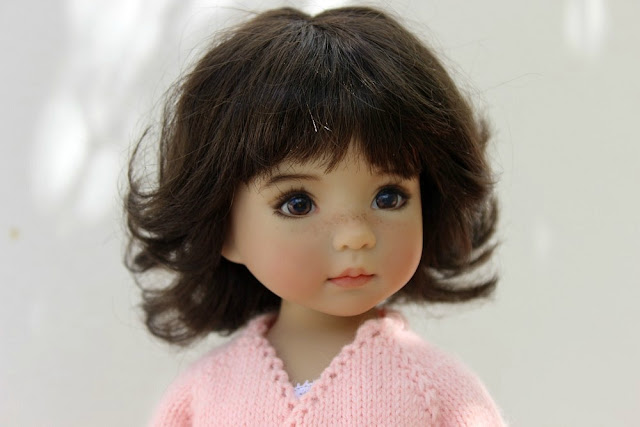 In April, a long standing dolly friend of mine in the US, contacted me to ask if I were interested in adopting her Little Darling, Zoe, a #2 sculpt, hand painted by Dianna.  I immediately said yes as the price was right and she is a lovely girl.  I named her Gem! 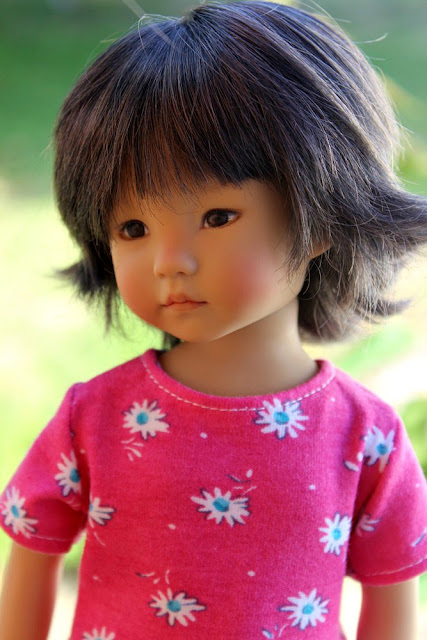 Later on in the year, September to be exact, my order with the LD artist Nelly Valentino, placed on the 4th January, was ready.  The 'twins' as they so became, arrived home.  I hadn't intended to make them twins, in fact I'd actually thought I might sell one of them, but twins they became and I fell in love with them both!!!

Nikola on the left and Antonia on the right: 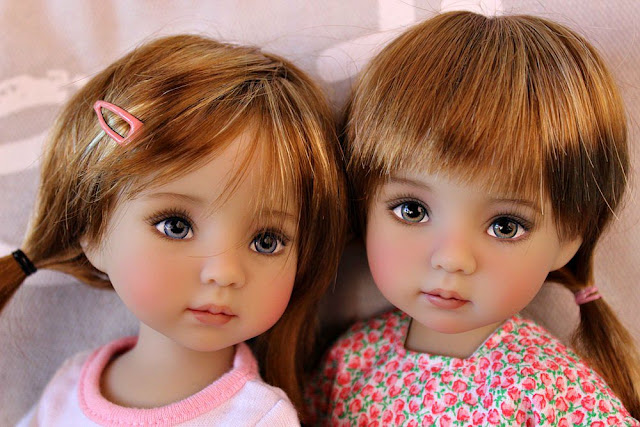 This brought my Little Darlings numbers up to 6, with one still on order with Lana Dobbs!!  And I only intended having the one!!!

In the meantime I also brought home a sweet little Boneka Tuesday's Child, from a doll shop in France.  Also designed by Dianna Effner, Daniela makes the perfect younger sibling for two of my Little Darlings, Finn and Reece. 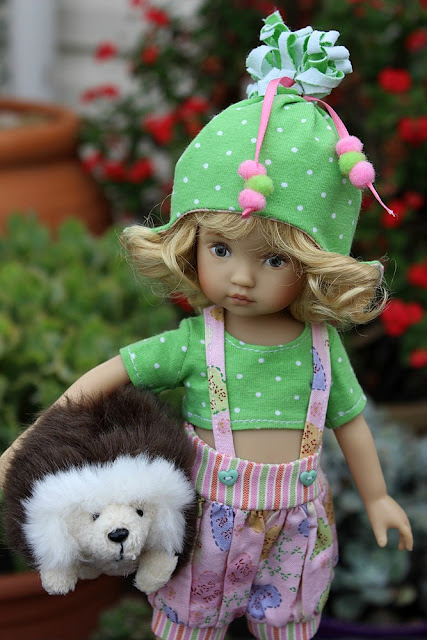 Not long before Christmas I was lucky enough to adopt a second Boneka Tuesday's Child from a doll shop in the US.  My dear friend Jan in the US, got her for me and  I will introduce her here on my blog very soon!

I also adopted some vinyl 'play dolls' this year, a couple came from here in Spain, one from the secondhand market in Fuengirola, a soft bodied girl by Zapf Creations, with vinyl limbs who has yet to have anything done to her, not even an outfit!  I don't actually like soft bodied dolls as a rule, but just thought she had a cute face and knees, yes you read that correctly, her knees were so cute as you'll see below!!! 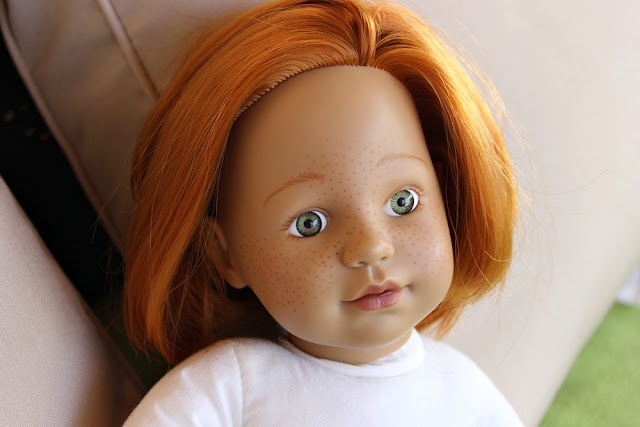 The plaster/band aid, is actually printed on to the vinyl, but looks very realistic! 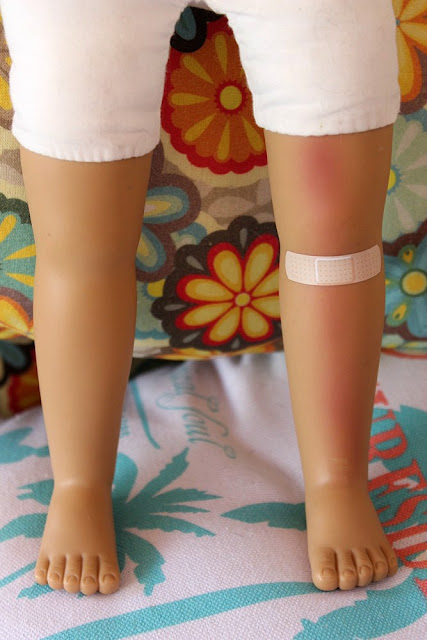 This next girl came from a local toy shop, she's about 18 inches tall and is made here in Spain by the Antonio Juan company.  I bought her to customise, but she's so nice that I haven't done anything but cut her middle parting into a fringe. 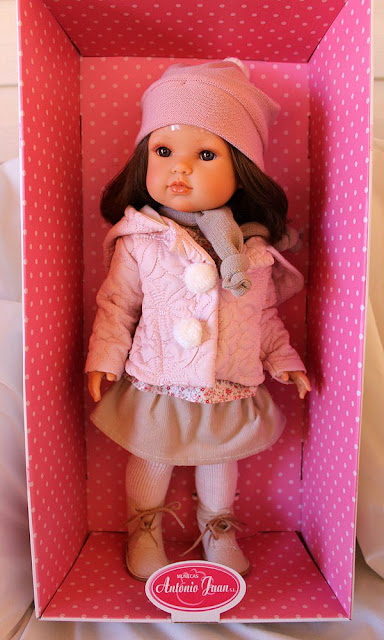 Whilst in England in October, I collected some dolls from my mum's house that I'd bought previously from UK sellers.  The first was a lovely Finouche Alice by Sylvia Natterer, which came from My Doll Best Friend.  I wasn't sure about her at first but when I brought her home and photographed her in natural light, I really saw the loveliness of this doll sculpt: And from a seller on Ebay UK, an almost new in box Goetz Happy Kidz Emily, who is such a little cutie!  And having recently hot glue sueded her joints, I'm even more happy with her! 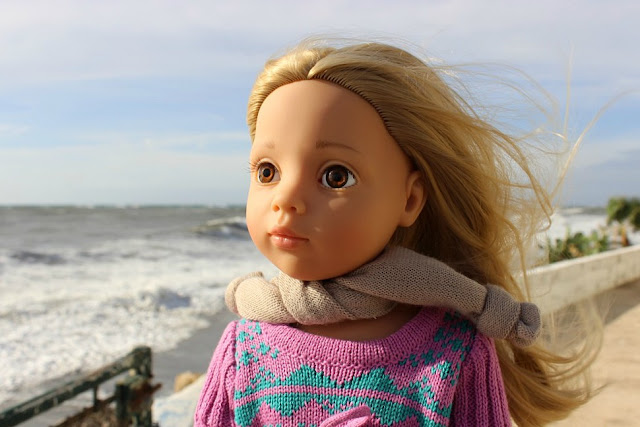 I brought this little Natterer home from Ebay Germany, but she is very very unsteady on her limbs so is currently in pieces waiting for me to restring her.  I just need to get the right elastic and hopefully she'll be all back together again soon!  She is a Goetz Finouche from 1989. 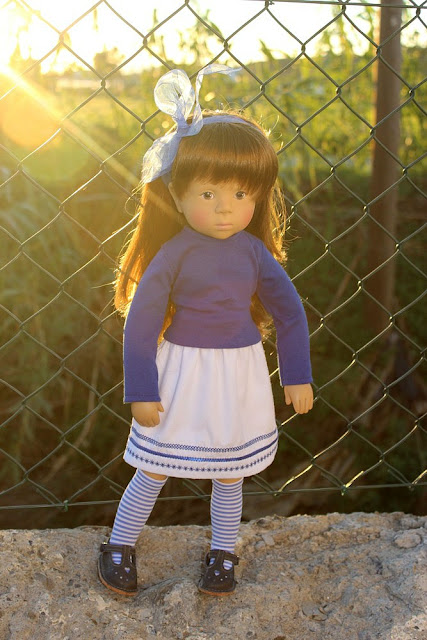 I'm sure I've missed someone but never mind, having counted them all up.....I think this is enough of a revelation as it is!!!!  It's amazing how, when spreading the dolly purchases out over the year, it doesn't seem like hardly any at all, but when you lump them all together in one blog post.....well, it's a bit of an 'OOooops!  How did THAT happen!' sort of moment, isn't it!!!!

Dolls aside, I'm sure that 2016 will be a great year!  My lovely son Brendan will be marrying his gorgeous Spanish fiance, Virginia, on 3rd September and they'll be having their wedding here in Spain.  Soon I will be starting the search for my outfit!  Wish me luck on that!

On that note I'm going to sign off for  now but want to say thank you once again to everyone who takes the time to stop by and read my blog.  I hope that everyone had a lovely, lovely Christmas and that the New Year will bring you everything you would wish for yourselves, but especially good health and happiness!