Dolls for Sale....Having a clear out!

Once again I'm feeling overwhelmed by the number of dolls living here and have decided to have a bit of a clear out.  I thought I'd offer these dolls here before putting them either on Den of Angels or Ebay.

I have two Volks Yosd sized kids up for sale.  Yosds are fully jointed BJDs, are approx 28cm tall, and made in Japan from resin.  Volks were the first company to offer resin ball jointed dolls and are very well known in the bjd world.  Volks Yosds were only ever available to purchase by people who attended their special events in Japan or by lottery at 'after events', so they were never available to purchase on-line for example.  You had to either attend the event or have someone else who was attending, purchase one for you.....and the numbers were limited.

The first is Volks Yosd Papi who is from March 2007, and has a custom faceup by myself.   She will come nude with a wig and eyes of my choice, not necessarily those in the photo below.  Volks dolls are extremely good quality and very well made.  This doll has a Volks box but it is not her own one, it actually belonged to another Volks doll that I sold, accidentally swapping out the two boxes!!  She is in very good condition and has her original Volks brass plate still attached to the back of her head plate.  Now on Den of Angels. 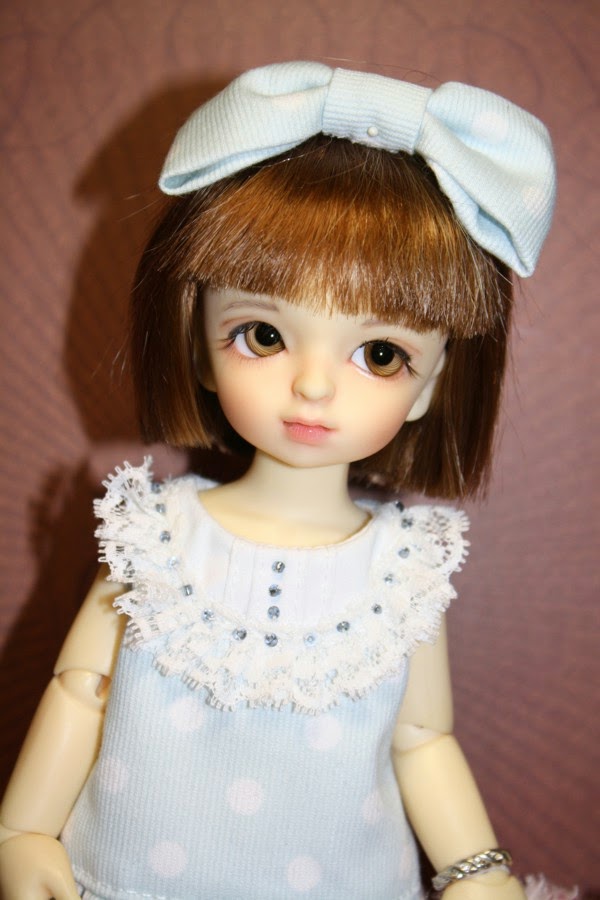 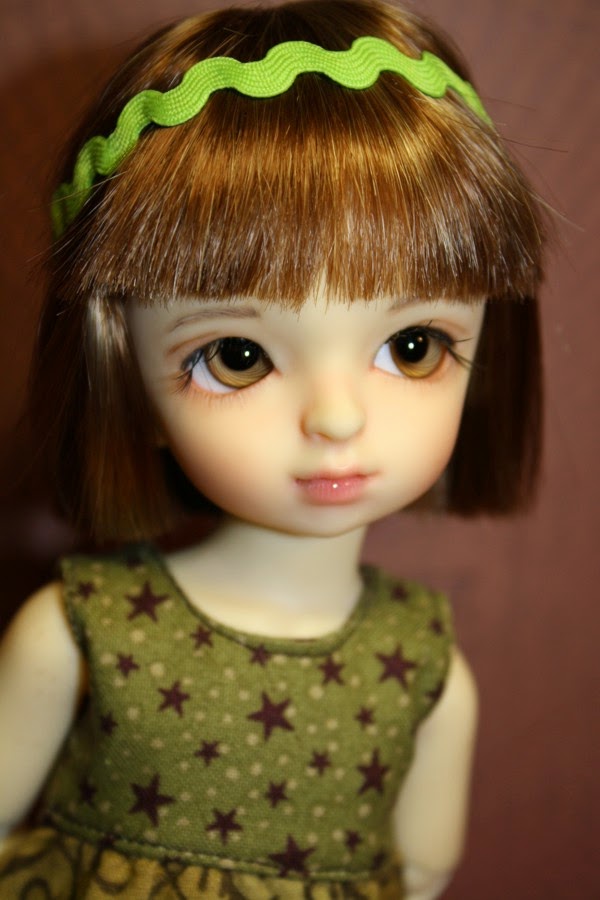 The next doll up for adoption is also a Volks Yosd, this time a boy called Neon who was released in March 2008.  He is also in very good condition with his Volks brass plate attached.  He too will come with random eyes and his default blond wig shown in the first photo below.  He comes in his own default box and I do believe I still have all his papers.  Neon is now SOLD. 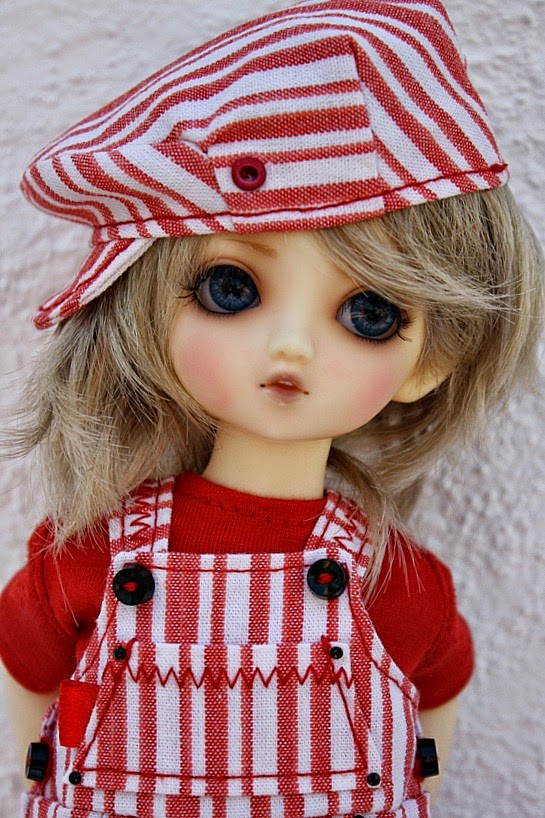 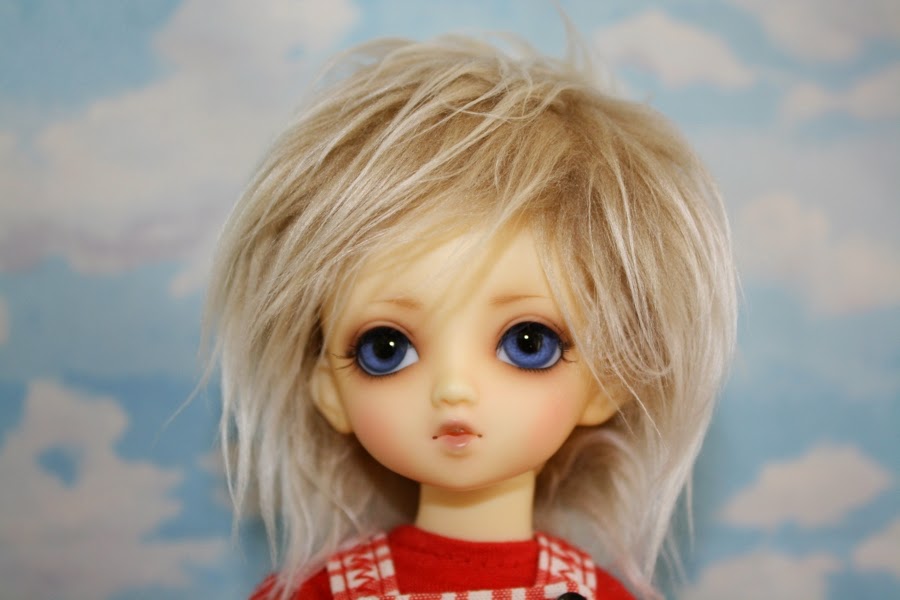 Up next is my Prima Dolly Ebony Blythe by the Takara Company in Japan.  A light tanned girl, she has been fully customised by myself, I have carved her mouth, nose and philtum.  She has been given new eyechips, sleep eyes, new pull rings, new eyelashes and her eyelids have been painted using bronze craft paint.  She has all new makeup with tiny freckles, using good quality artists pastels and sealed with Mr Super Clear Flat.  Her middle part black hair has been given a fringe/bangs.  She will come nude in a Takara Blythe box. 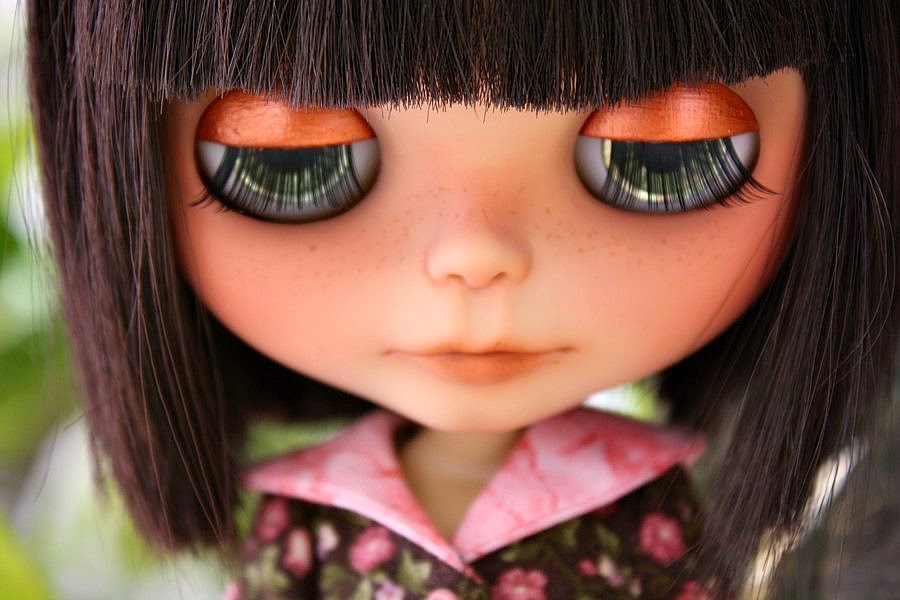 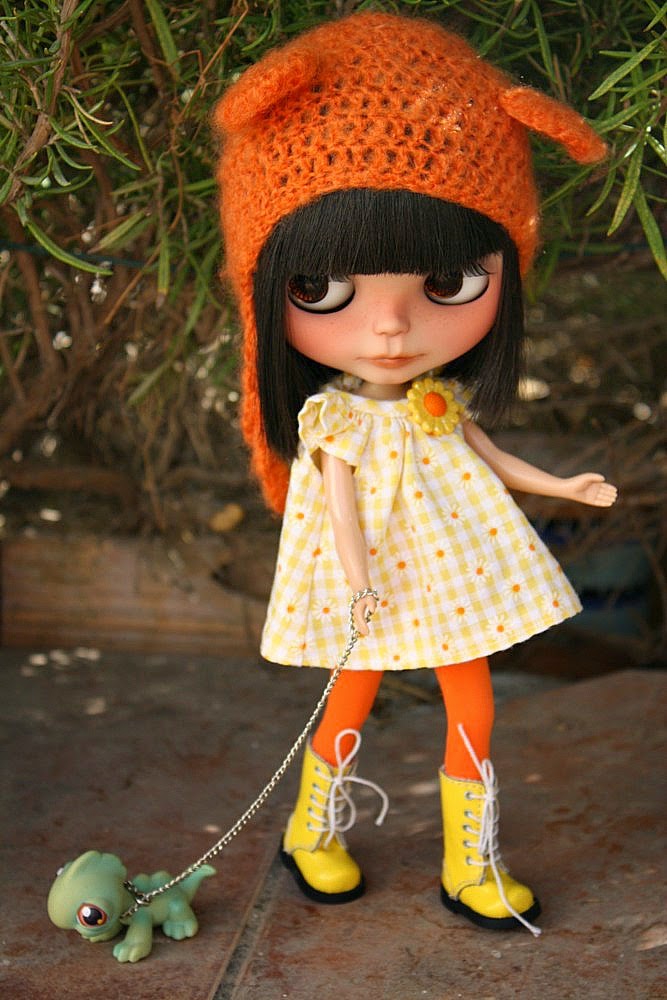 And next we have the little Paola Reina girl that I recently gave a makeover.  I think she is called Carol.   I like her but I prefer the little Asian girl that I had first.  So this little girlie is up for grabs.  She has been thoroughly cleaned and her default hair removed.  I gave her a nice dark blond Leeke World wig which I cut into a chin length bob as I thought it suited her better.  I also removed her existing plastic eyes and replaced them with good quality oval flat backed blue glass eyes, which I think bring her more 'alive'.  She has also had her spridery default eyelashes replaced with some nice natural looking upper lashes.  She will travel to her new home nude.  Price £30 plus postage.  NOW SOLD - 07/07/15 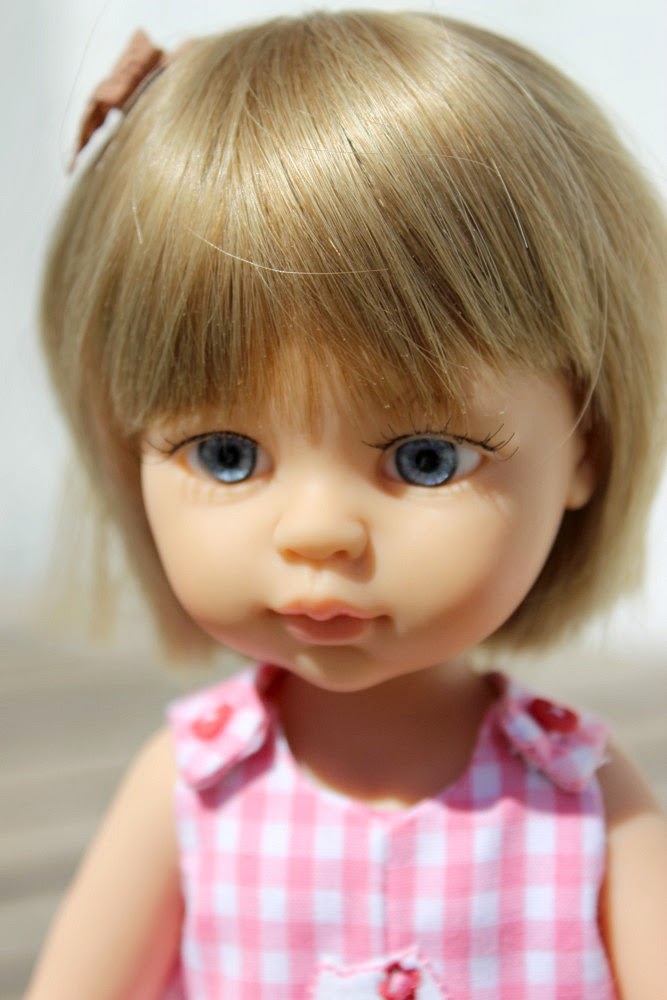 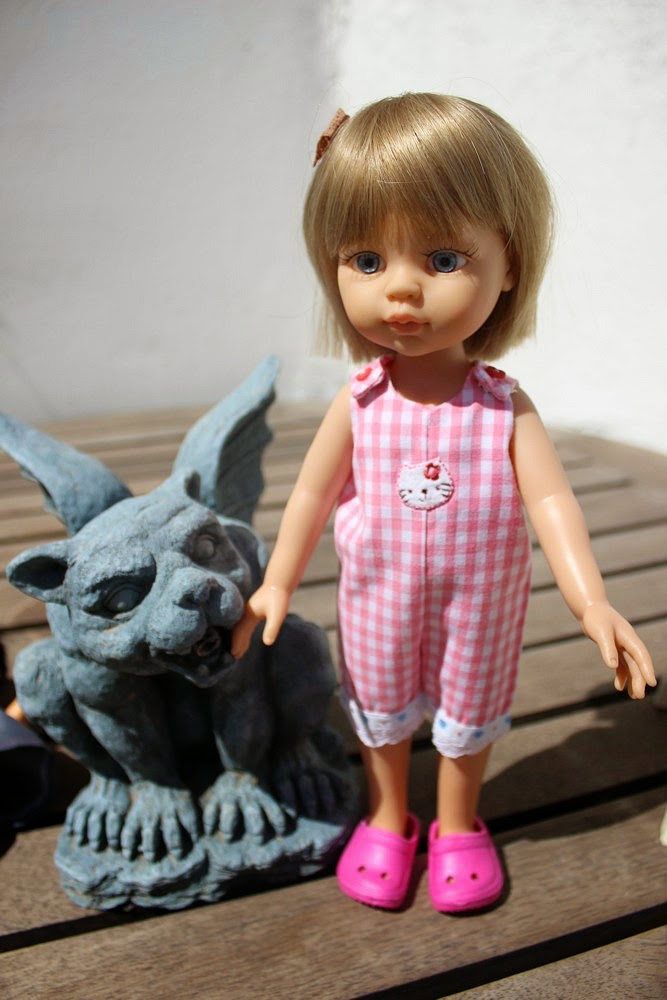 Finally today, I have a former Euro Girl who some time ago I made into a Euro 'boy'!!!  This genderless vinyl doll was given a short haircut and her eyebrows were made a little more 'boyish'.  I've had this doll for several years but I have probably only dressed him twice!!  Poor lad is looking for a home where he'll get a bit of the attention he deserves!!  He will also travel nude to his new home, all ready for dressing as a boy!!!  As you can see he has the cutest little face with hazel inset eyes and two teeth showing in his slightly open mouth.  His back, just above his bottom, is a bit concave...I have no idea if this is normal as I can't remember him ever having been any different from when I got him new several years ago.  He also has faint staining on his upper arms on the inside from the outfit (s) came in.  Now on Ebay.com. 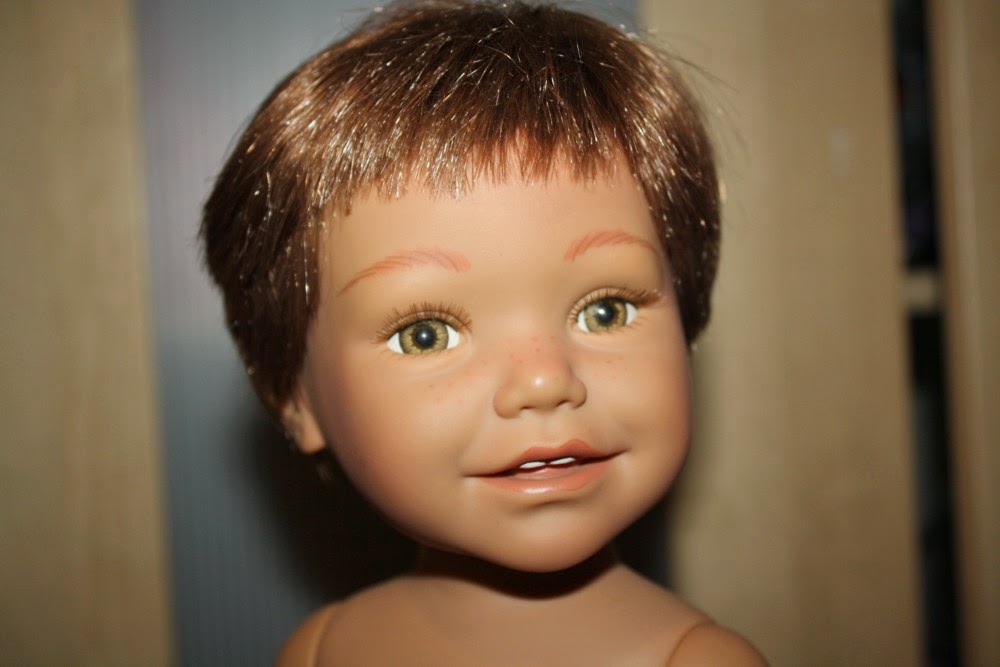 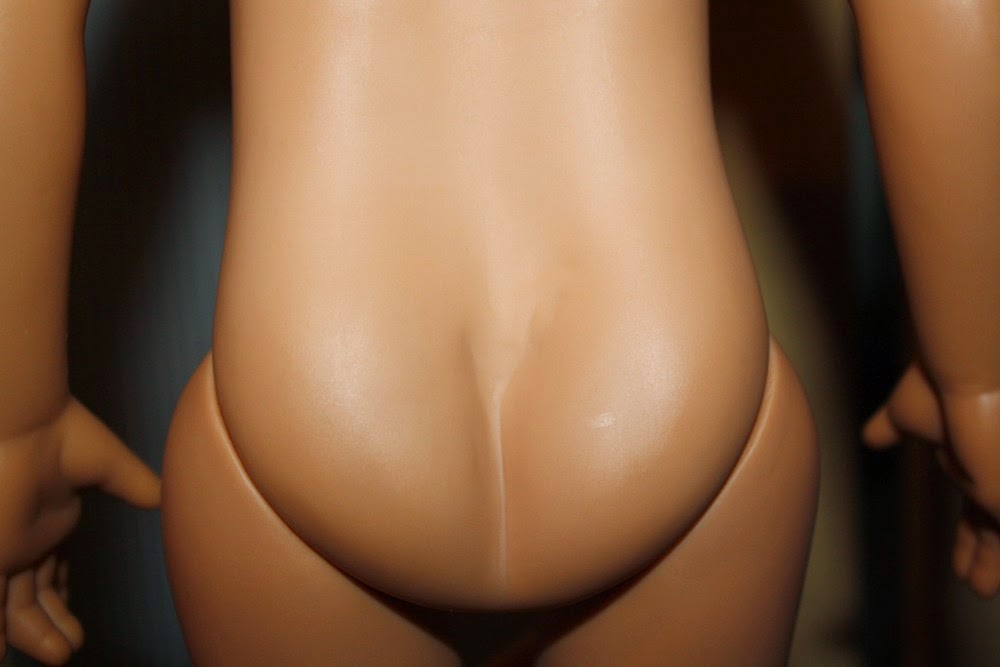 I accept paypal only, personal payment/gift preferred.  My home is smoke free but I do have my little dogs but they don't play with my dolls.  All items will be packaged well and travel via certified mail.  I ship worldwide.  Please email me if you require further information or more photos, my email address is: dambuster0662@gmail.com

ALL  DOLLS IN THIS POST HAVE NOW SOLD - THANK YOU!