......But I'm thinking of getting a motor scooter or moped!

The town I live in is very very old and not designed for motor vehicles.  The streets are really steep and most are also incredibly narrow, so parking is an absolute nightmare for cars.  The majority of my errands around the town involve the use of the car as they are too far to walk, but then I go around and around, like everyone else, looking for a parking space.

So I suggested to my long suffering husband (who incidentally no longer drives) that maybe I should get a moped or motor scooter, which would be really handy for when I have to go out to the bank or post office, or nip to the supermarket for one or two things that I've forgotten.  Admittedly I would still use the car for the weekly shopping, or journeys outside of our town, but it would be so useful for everything else.  Amazingly enough hubby seems to agree that it is a good idea!  So today I nipped out in the car and went to the one and only motorcycle shop that we have here in Estepa.  They had some lovely models on display but I saw the cutest moped and so asked the owner of the shop all the details.

Although I can't remember the make (it certainly wasn't a Vespa, unfortunately!) the model I favoured is described as the 'classic' model and he suggested I might prefer a 125cc to the 50cc that I had in mind.  Apparently the 50cc might struggle on the hills, and my driving licence enables me to ride a motorcycle up to 125cc without the need for another road test.  The guy must have thought I was so 'girly' when I said that I particularly liked this model as it was such a nice colour (cream), with an attractive brown seat and old fashioned look about it, and it had a little box on the back which would be perfect for my handbag!  The 'cargo' box, a crash helmet and an anti theft lock are all included in the price.......insurance would be extra but as my son so kindly pointed out, it wouldn't be that expensive for a woman of my age!!!!!!

Now to make the decision on whether I really will use it......because unfortunately they are not as cheap as I envisaged!!! 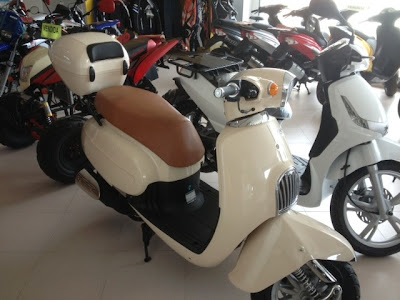