I was asked to make a Mori outfit for my friends Mini Fee.  Mori girl style seems to be the 'in' thing now for some ball jointed dolls, and I have to say that I like it so much better than the Lolita or Goth looks that this look seems to have replaced.  Anyway, I finished the outfit yesterday and my friend has 'approved' it, so I will now share it below.

'Mori' is a Japanese word and the fashion style apparently emerged in 2007.  It literally means "forest" in Japanese and the style concept is "a girl who looks like she is living in the forest" The look is natural & earthy.  Mori girl has developed not only as a style, but as a lifestyle as well! Quirky girls who love vintage clothing, pocket watches, tea, moss or going snooping in the grandma's attic will feel right at home in this fashion style.  (WikiHow)

Most Mori outfits have layering to them and this one is no exception.  The whole design was drawn up by my friend, who then sent me the designs and the fabric.  I just made it.  So all credit goes to her!

The skirt actually consists of 4 skirts!  The first two are almost floor length, the innermost being buttermilk coloured knit and then the next one is of cream lace.  The third skirt is flared from the hips, having a 'yoke' instead of a waistband.  The final, outermost skirt, has an elastic waist and the bottom is made up of 'points'....I have left the hem unfinished, with just a row of straight stitches because I didn't want to 'lose' those points with a proper hem.  The edge of the fabric is fraychecked and actually reminds me a bit of 'leaves' which fits in quite nicely with the theme.

The short sleeved top is a leotard/body which cuts down on bulk around the waist, there is already enough of that with the skirts, so a leotard works much better.  Then the 'waistcoat' style top opens down the back with a false front opening.  It's fully lined and a little more loose than I'd have liked but I needed it to be this way so that it sat better over the waistbands.

Here are the photos.  The computer generated 'drawing' was designed and sent to me by my friend,  I hope you'll agree that I got pretty close to what she wanted!! 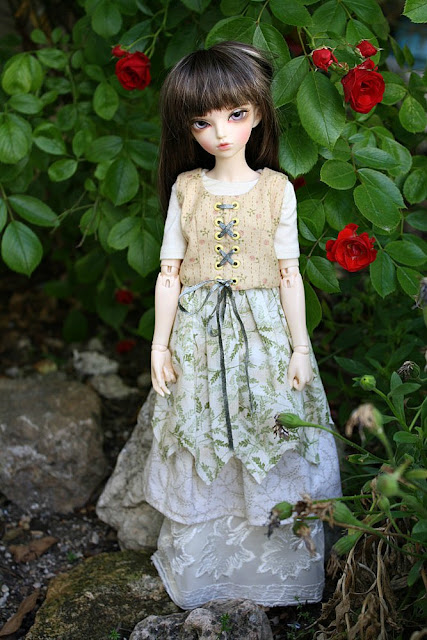