I can't believe how long it's been since I last wrote on my blog, I'm seriously lacking in enthusiasm for it at the moment, but I have no idea why.  Laziness I guess!

However, I've not been lazy on other fronts, so thought I'd share a few photos on here.  I spent last weekend sewing an outfit for a friend of mine, she wanted one like my last auction one, but of course I like to work in different fabrics and colours.  I'd hate for someone to feel they'd bid on an outfit on ebay only to find that someone else has the exact same outfit as theirs.  I also find it incredibly boring to use the same fabric and make the exact same outfit all the time.  That is why, although I don't advertise things as being OOAK (one of a kind), they invariably are.  So here are a few photos of my latest outfit: 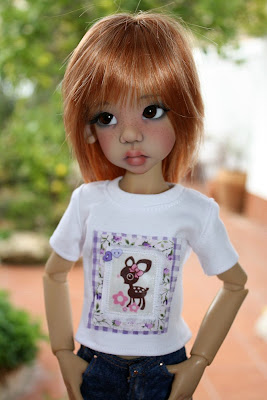 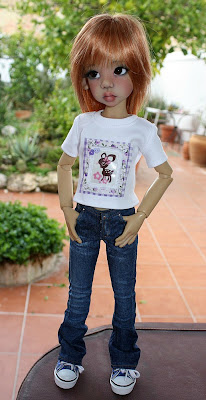 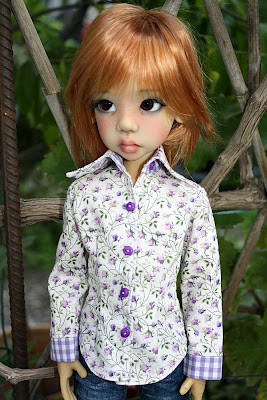 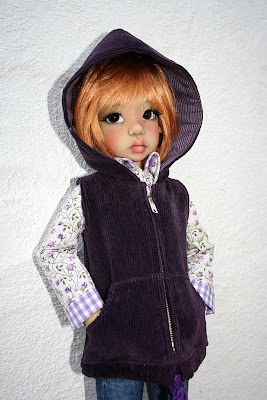 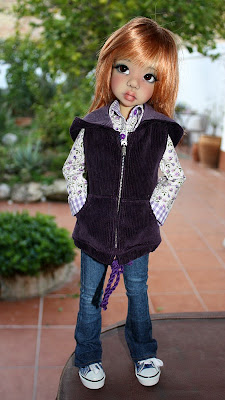 I have also been busy on the Blythe front too and have customised my blue haired girl that I got on ebay.  I was under the impression that she was a 'factory' girl, and although they are not 'official' releases by Takara, I decided to go for her because I really wanted a fantasy hair girl.....but having posted her photo on Flickr, I hear (and now see for myself) that she is actually a 'fake' Blythe.  I am not upset about it, as I had planned for her to be customised anyway.  So she is done for now.  However, I feel that she is a little over blushed so I'm going to have to redo her makeup, which is a shame because this make up already took me three attempts!  Having said that, I do need to take her head off again anyway, as I noticed after I'd finished that one of her legs doesn't bend so I will need to change her body over for a better one.  I might get her a Licca body or perhaps put her on one of the spare Pure Neemo ones that I have hanging around here headless!

I also spent some time dying my Border Spirit's yellow blond hair and she is now a raspberry haired girl.  I didn't intend for the colour to be so deep, I really wanted a pale baby pink but I guess that wasn't to be......well I did say that I wanted a fantasy haired girl...I now have two!  I like her, especially since adding some extra blush.  I now have 7 Blythe girls living here, 6 are customised by me and one, Bohemian Peace, is waiting patiently to be done.  I might make a start on her this week.  I also have an FBL faceplate and all her body parts, the faceplate is at Olga's house (Vainilladolly) waiting for her to customise her for me.  I hope that she'll be done soon, because I've wanted a Vainilladolly for 2 years now, since I first saw Olga's girls on my first visit to her house.

In the meantime, I have yet another outfit started for ebay, so hopefully I'll also get the rest of that done so that I can post that on there for sale.  I guess at the moment, with the terrible storm Sandy making it's way across the US, it is probably not a good time to put it up for sale anyway, bearing in mind that most of my customers are in the US.  I will use the time to think of what to make!

Apart from that, nothing much else happening here.  It is a lot cooler at the moment, and it has been raining on and off today.....I'm so spoilt with good weather that when it rains I really hate it....even though I know we need it for the farmers!

On that note, time to make the lunch, so that's it for now......just a couple of odd photos to share.  The blue haired girl is called Budgie and the pinky one is now known as Candie...as in Candy Floss!!!! 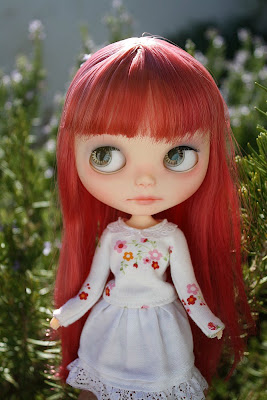 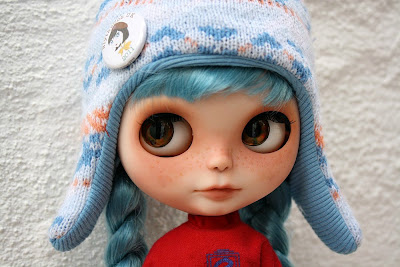 It's been incredibly quiet around here on my blog because I've been very busy sewing my outfits for Ebay.  I am on a roll now, so I just want to keep the momentum going!

I finished my latest outfit for the Kaye Wiggs MSD sized girls on Monday, and listed it last night.  I'd spent the afternoon out and about in our town, taking photos of Hope in what I hope are interesting and pretty settings, hopefully showing the doll and outfit to it's best advantage.  Having said that, Hope is such a photogenic doll that she looks great in any outfit or setting!  Here is a link to the listing: 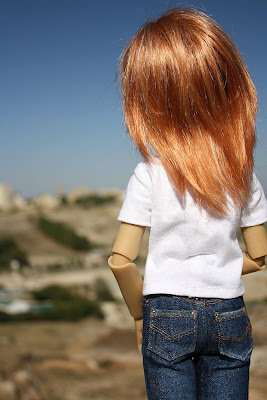 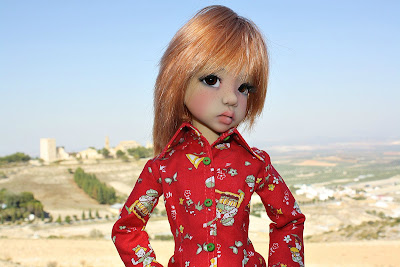 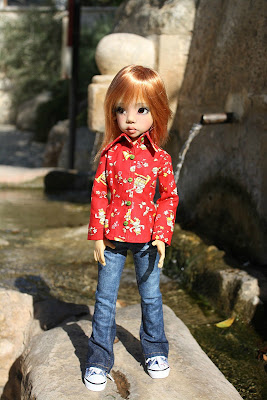 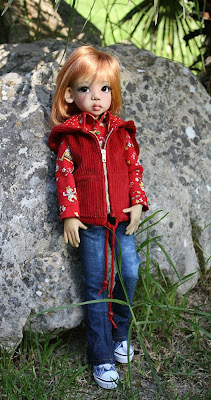 My last outfit went really very well on ebay, I'm still in shock actually!  Thanks to everyone who supported me by bidding!

I have had quite a few enquiries about doing commissions, but unfortunately I would prefer not to take on any extra sewing at this time.  I found that I used to get very stressed out about how long my waiting list was, how many months people were having to wait for their outfit to be made, and worrying that having finished the outfit, it wouldn't be what the person was after.  Luckily the latter didn't happen but it is still very stressful to make an outfit from someone else's idea that they have in their head, just from a description, so for the time being I'll keep my commissions list closed.

I won't rule out taking commissions again in the future, but for now, thanks for all the support!

On dolly comings and goings .... I'm waiting on a lovely little dollie to arrive.....but will keep the details under wraps until she gets here.  She left New York yesterday  so hopefully she'll not be too long in getting here as she is travelling via EMS.  I'm keeping everything crossed that she'll not get caught by customs....

My other dolly news is that Raven of Ravendolls, has finished the faceup on my ex Pirate tanned Lati Yellow Lea...and she will also be on her way home here soon!  She is really cute looking and I'm very happy with what Raven has done to her.  I didn't give her a great deal of instruction, so it's lovely that she is just how I envisaged her!  Here are a couple of photos which belong to Raven, but I'm sure she will not mind me sharing them here: 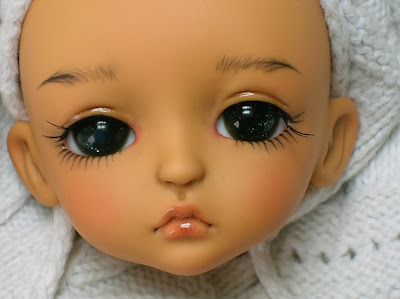 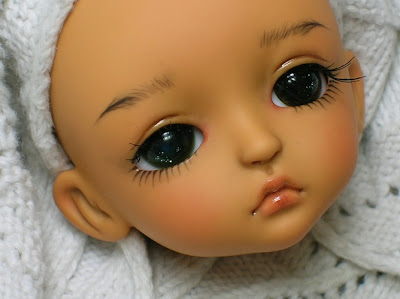 She will have brown eyes, but the bigger challenge will be what wig she'll wear.   The wig she was wearing before she left for the Spa, has been 'stolen' by my Kaye Wiggs Tillie, so now I'll be on the hunt for the perfect wig for her!   All wig suggestions gratefully received!!!!