Yesterday my hubby and I went for a drive to Torremolinos which is approx 40 minutes by car along the coast from our place here in Benajarafe.  I wanted to visit the art supplies shop there because I'm looking for a particular carving tool.  No such luck with the tool so I bought a couple of red shades of soft chalk pastels....I didn't like to walk out empty handed! (Any excuse!)

However, what I did find elsewhere were an abundance of 'Fish Spas'....4 of them within about 200 metres or so of each other!  For those who don't know what a Fish Spa is, it is a place where they have these tanks set up, filled with tiny little fish....you put your clean feet into the tanks and the fish frantically nibble at your toes, apparently eating any dead or dry skin as well as being 'good for the circulation' or so they advertise.

I decided with the encouragement of my husband to have a go.  It was relatively cheap at 10 euros for 15 minutes and after I'd paid my money and had my feet washed by the nice lady proprietor, I tentatively dipped my feet into the tank.  I needn't have been apprehensive because it was lovely!  The little fish instantly surrounded my feet and started doing whatever it is they do.  It felt quite amazing, like lots of tiny electric shocks, but it was really really relaxing, I could have stayed there all day!

As it was the 15 minutes went really quickly and I soon had my Birkenstocks back on and was on my way, but I certainly enjoyed it and my feet felt lovely afterwards.

I would definitely recommend this 'treatment' to anyone who fancied having a go.  And the great thing was, not one single dead fishy floating on the top of the water!  Must be my feet aren't so bad after all!

Today I met up with Olga and we had a great time, lots of dolly chat and laughter, as well as putting the world to rights, as we usually do!
I took several dolls with me but I took Percy, my little Secretdoll Person 21, especially for Olga to give her a new faceup, after my own efforts at doing so failed so dysmally!!!!  I'm delighted to have my little Percy back again, she looks even better than she did before!  And she certainly hasn't lost any of her attitude as you'll see below!! 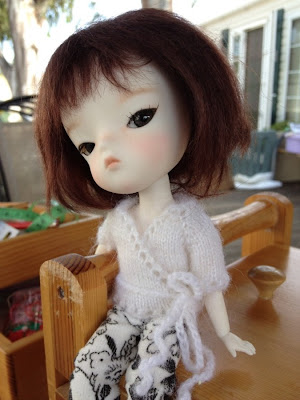 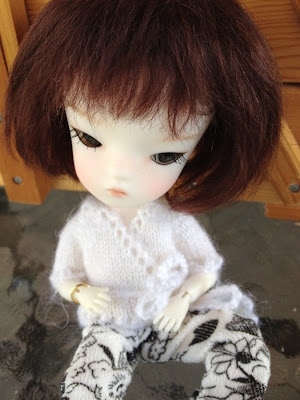 Also I left my FBL faceplate with Olga for carving....I'm very excited about it and hope that she'll be able to work on them soon!  I can hardly believe that I've wanted a Vainilladolly girl for almost 2 years now, and maybe soon one will be within my reach!

Here are a couple of other photos taken today, one is of Hershey, my Simply Chocolate and the other of Olga herself.  She wanted me to edit the photo but I think she looks nice as she is!!! 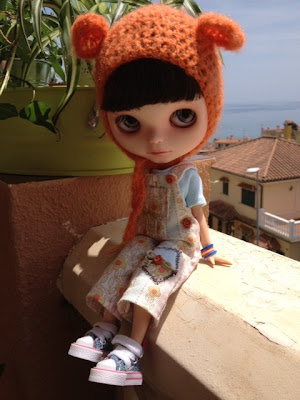 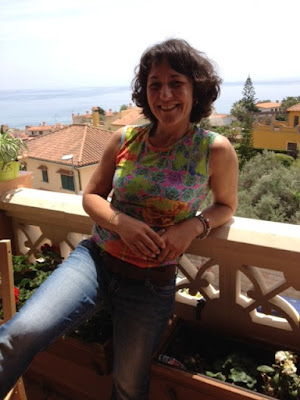 In other news, the weather has been beautiful and hot, although cooler down here on the coast.....it was really very hot in Estepa before we left last weekend....low 30s centigrade.  And in Sevilla they've been reaching temperatures of high 30s!!!  Even in Sevilla this is high for mid May!  I'm not complaining though, I love the hot weather and it could stay this hot all year round if I had my way!!

I got the urge last week to remove the lips on Percy, my Secretdoll Person 21, thinking that I'd redo them with a bit more detail.  I started to remove the default paint and immediately I knew that I'd made a big boo boo!  The lips and area around them just went completely gooey, all horrible and sticky and I could do nothing more than remove the rest of the faceup.  I was 'lucky' enough to be able to keep the eyebrows, so thought I'd give her a whole new faceup using the existing eyebrows.....because eyebrows are my least favourite part to do!!!!  However, all the best laid plans......despite giving her a base layer of Mr Super Clear Flat, the pastels just wouldn't adhere to her lips.  I was so upset because she is one of my favourite dolls.

However, thankfully, my friend Olga has come to my rescue and she is going to give poor Percy a new faceup next time we see her.  I can hardly wait to go to the coast so that we can meet up and get Percy back to her old self again!

Of course Olga won't take monetary payment from me to do the faceup, so I'm sewing some outfits for her Blythes and Persons.  I hope she'll like them.  I've been sewing a few hoodie sets, one of which is for Olga, and then after I've done with these, I'll start on some other items for her.  I have a few ideas in mind and hope that Olga will like them.

Here are a couple of hoodie sets that I finished.  The first one is hand drawn using some fabric pens which were a gift from my good friend Sue in the UK.  I'd searched everywhere for them here in Spain but was unable to find any, so Sue got them for me at HobbyCraft.  The design, would you believe, has been in my head now for some 37 years!!!!  When I was at school, one of our art assignments was to design a 'tile' that we could then carve into a 'stamp' and this was the design I came up with at the time!  I decided to draw it straight on to the completed hoodie and live in hope that it would come out OK.  And thankfully it did!  This one is going to be for Olga as she has already said that she likes it, having seen my photo on Flickr.  I wouldn't normally show anything on Flickr that I intend as a gift, because I don't think it is fair for the seamstress to get all the attention for something that is made for someone else.  After all, what is the point of a 'surprise' gift, if everyone else has seen it anyway???  There's nothing left for the 'receiver' to show really, is there?  As a friend of mine said "It's almost like the outfit is secondhand by the time it arrives home to me!"  But when I showed it, I wasn't sure if it would be to Olga's taste, so thought I'd probably end up keeping it, but she commented that she loved it, so it shall be hers!!! 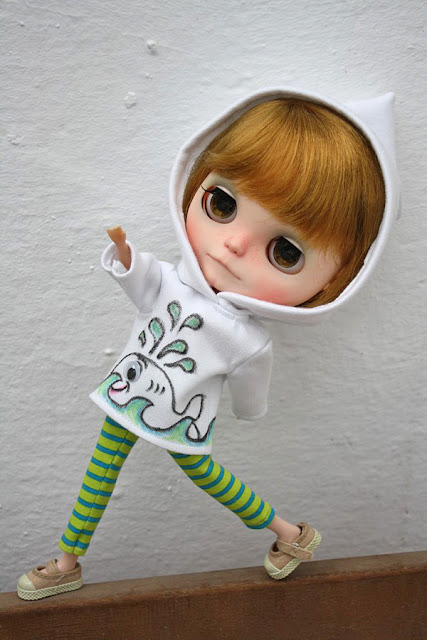 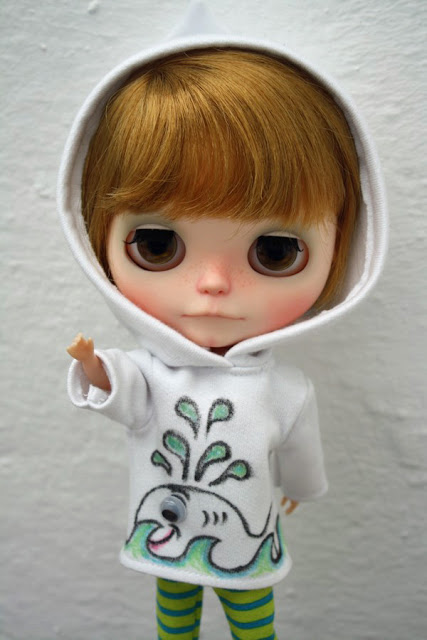 The next one was done using a mixture of fabric paint, fabric pens, a bit of basic embroidery and some sewn on 'flower' buttons.  I'm not sure what I'm going to do with this one, maybe I will try selling it on Ebay or something. 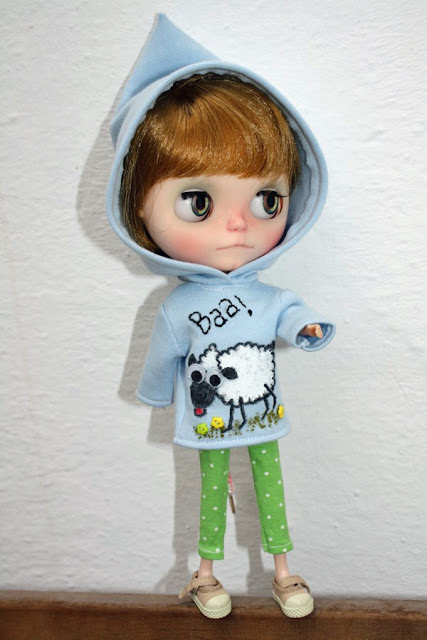 Tomorrow I will complete the leggings to go with the other two hoodies that I've made and take some photos of those then.

In other dolly news, I had two new arrivals this past week.  The first was a NRFB Blythe Border Spirit which I won on Ebay last weekend, she arrived on Wednesday as the seller was here in Spain.  She's really pretty and has four sets of special chips.  Her little outfit is cute too, except for the shoes which are big stacked platforms.....they might end up on Blythe Kingdom!!!!  And secondly, Bohemian Peace came from Scotland.  She was a trade doll and she is lovely too.  Her previous owner cut her hair into a fringe, it's pretty and very well done.  She has the softest hair and I'm going to have fun when I eventually customise the two of them!!

No photos of either of the new girls yet, but I'll hopefully get around to that this week too!

Apart from that, weather-wise it has been very very wet during the last week or so.  Not particularly cold but last night I did put my quilt back on my side of the bed!  Hopefully, looking at the weather forecast for this week, things are looking up!
Posted by Sharon at 18:29 No comments: