Summertime and my poor neglected blog!!

I cannot believe that we are now halfway through July, where does the time go!  I also cannot believe how neglected my poor blog is, I really do need to pull my finger out and get blogging properly again.  But we have actually had a very busy few months so I feel that I have a good excuse ;)

Summer starts very early here and with it comes the intense heat and, here on the coast, very high humidity.  This years June seemed particularly hot and sticky but I admit that I love the heat....have I mentioned that before? :D  And I would take the summer months over the winter any day, despite how short our winter is!  But it does make me feel particularly lazy sometimes so I have spent my spare time just relaxing and reading, I've read loads of books.....but as a result my dolls have been seriously neglected too, poor things.

I had to buy a new eReader last month as my Kindle decided that it was going to stop working.  It wasn't particularly old but of course it was out of guarantee.  I looked around and finally decided on a Kobo Aura One with a nice 7.8 inch screen, and so far I'm very pleased with it.  In fact I've struggled to put it down sometimes!

My mum and brother came over for two weeks from the 23rd June and it was lovely to see them as I'd not seen them since Christmas.  We did a lot of eating out and more relaxing.....well in this heat you really can't do too much, can you!  On their first night it was the fiesta of San Juan which is celebrated in a big way here and denotes the beginning of summer.  In Torre del Mar, our nearest town, there was a large and colourful evening craft market which went on for several days, as well as musical performances, tastings of sardines, competitions, games on the beaches, in addition to the traditional bonfires that are lit at night on the beaches.

I did a little bit of shopping at the market, well it would be rude not to, wouldn't it!  And having seen this stall, I had to buy my girls a guitar as they were the perfect scale for the MSD sized BJDs.  And at only 8 euros each, I couldn't pass one up!! 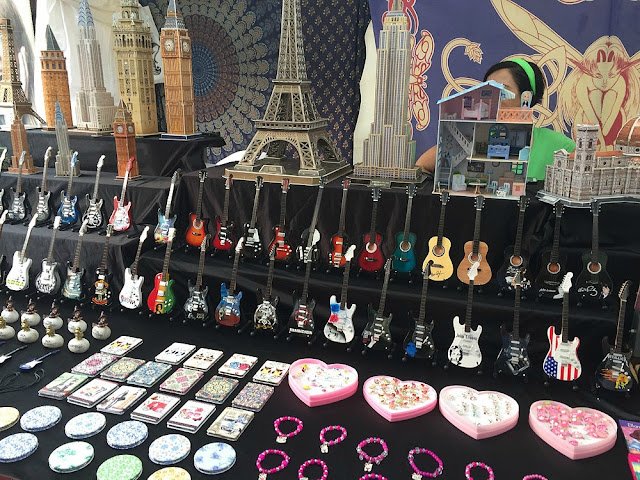 I was seriously tempted by the Beatles drum set and the violins too, and now I regret that I didn't buy anything other than one guitar from this stall!  Oh well, there is always next year! 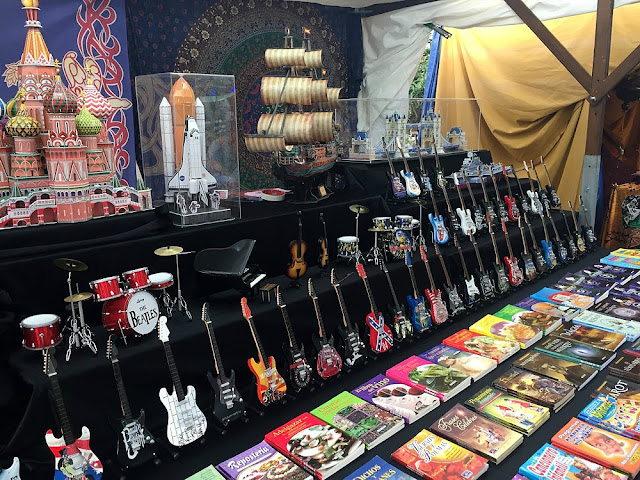 Brian and John enjoyed the things that were put in place for the children!!! 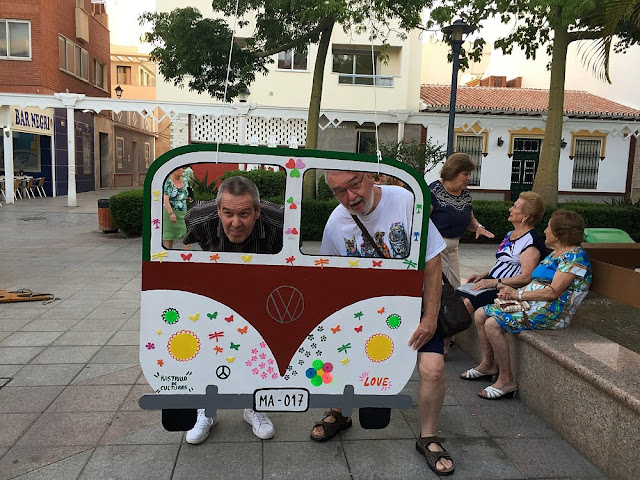 Later, we ate in a nice restaurant called the Safari Lounge.  The food was lovely, but the portions were so big!!  Here's my mum and brother waiting for their supper. 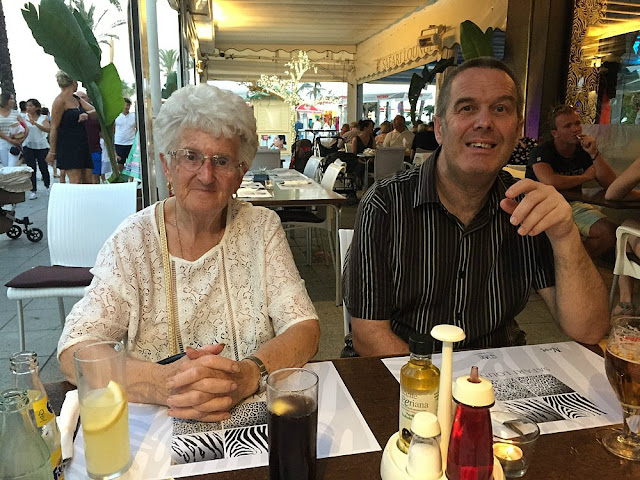 We went to Nerja for a day and ate in a very nice Japanese restaurant.  I didn't take any photos in the restaurant but took a few on the Balcon de Europa which was busy with holiday makers.  I do like Nerja, but have to say it's much better in winter when it's not so busy. 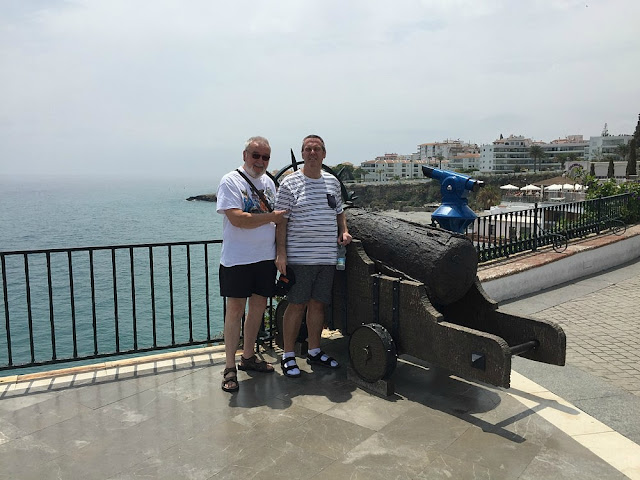 We also went into the church located at the Balcon de Europa, called El Salvador.  The interior was so lovely and cool and peaceful, after the heat of the street! 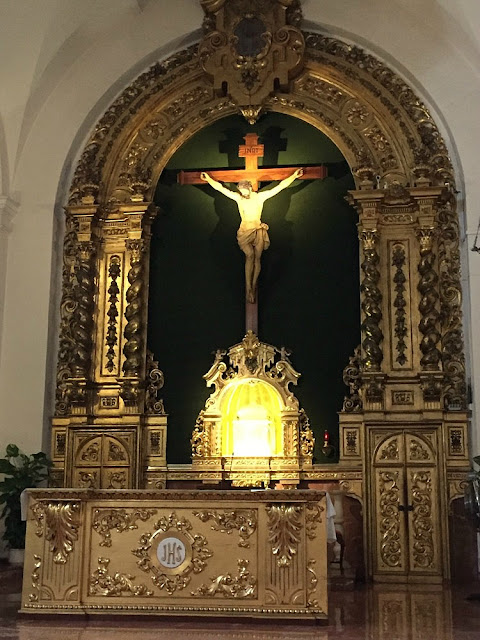 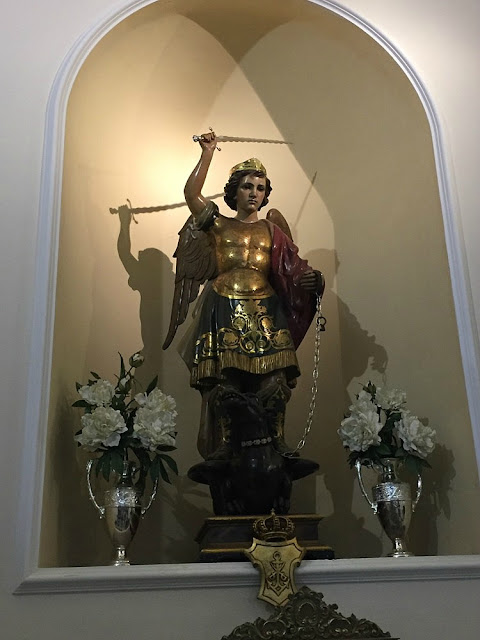 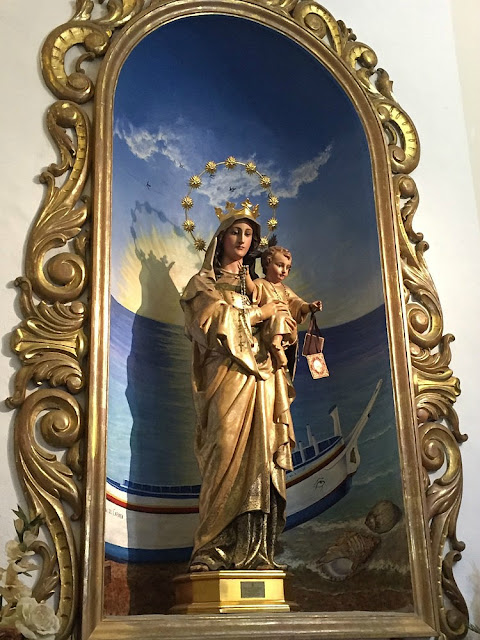 Afterwards, a welcome drink in a bar... 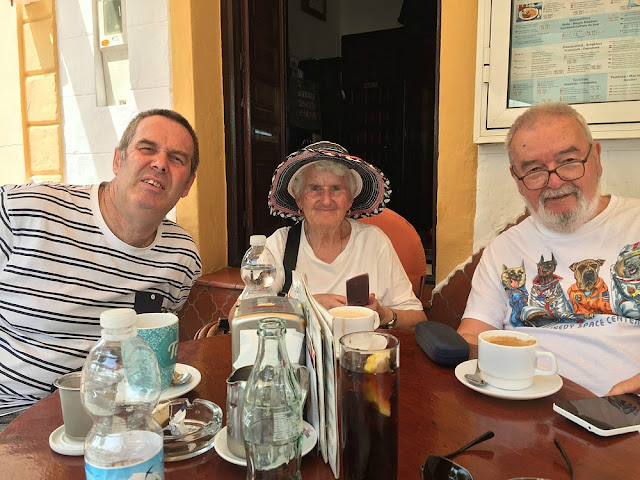 We did lots of other things and ate many more meals in restaurants, but I didn't take my camera out with me at all, I have no idea why!!

As well as my family visiting, I have been working on my fitness because over the years I've got lazy about exercising.  After a whole bunch of tests over the last 3 months, I've finally been told that I have bone degeneration, so thankfully nothing too serious.  Anyway, I decided to start walking as I love to walk but had been putting it off and putting it off using the excuse that I wanted someone to walk with.  So for the last 6 weeks, Lucy our Miniature Pinscher and I, have been getting out of bed at 6.30am and walking from 7am for a minimum of an hour.  We head out into the campo and just walk!  It is a wonderful time of day, the sun is only just rising and there is a real freshness before the intense heat of the day. 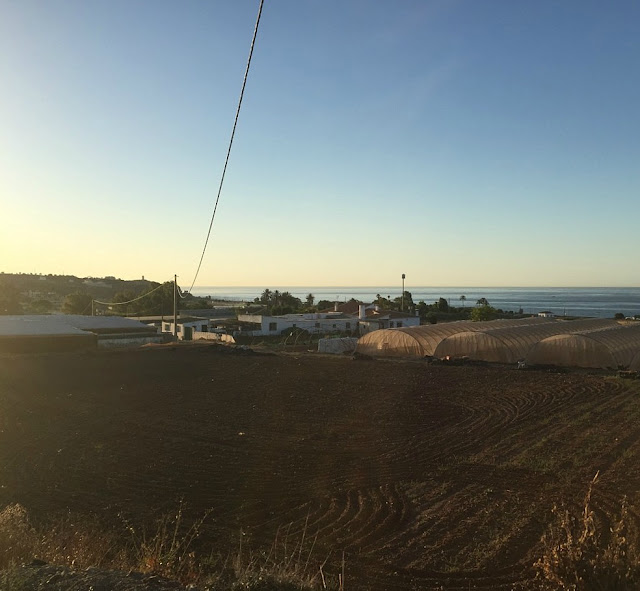 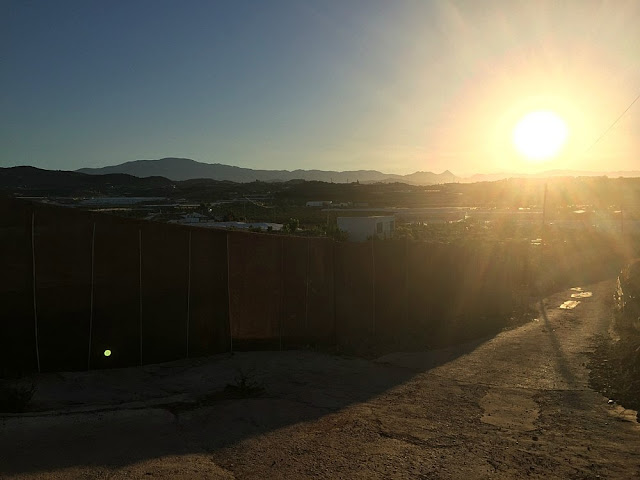 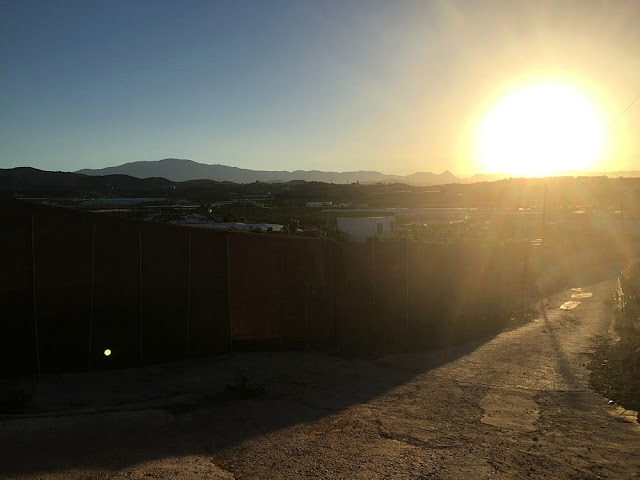 We just climb higher and higher until we are able to look back down towards the sea, it feels like being on top of the world!!!!

We've met some lovely people, Pepe and Maria, who, along with their little Yorkshire Terrier, are walking in the opposite direction to us and always stop for a quick chat about life as we pass, as well as a farmer who gave me nine of the most delicious freshly picked tomatoes that I've ever tasted!!! 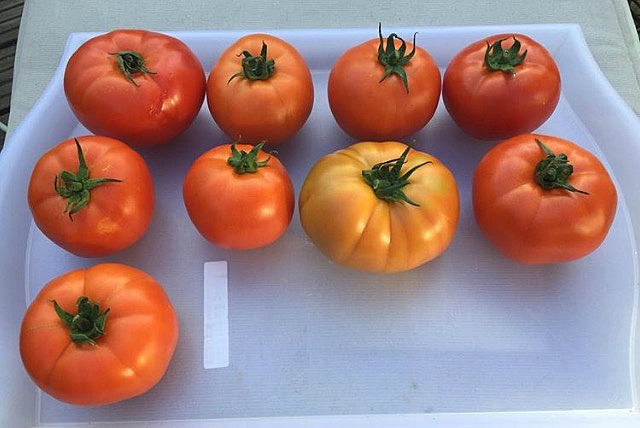 We've spotted quite a bit of wildlife too, including Hoopoe birds, which I've tried to get photos of as they are so pretty.  Unfortunately my iPhone doesn't zoom in far enough to get them but I plan on taking my proper camera out with me soon. 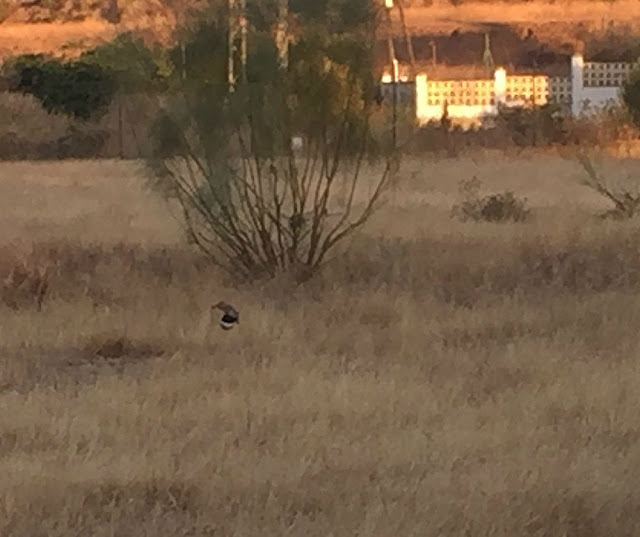 We also discovered a snake!  Unfortunately for the snake, but perhaps fortunately for us, it was dead, having been flattened by something.  But it was a biggie!  I have put my foot in the photo to show you the scale....I would put it at about 5 foot long including it's tail which was separate!!! (That's the snake, NOT my foot!!!)  Lucy was very interested! 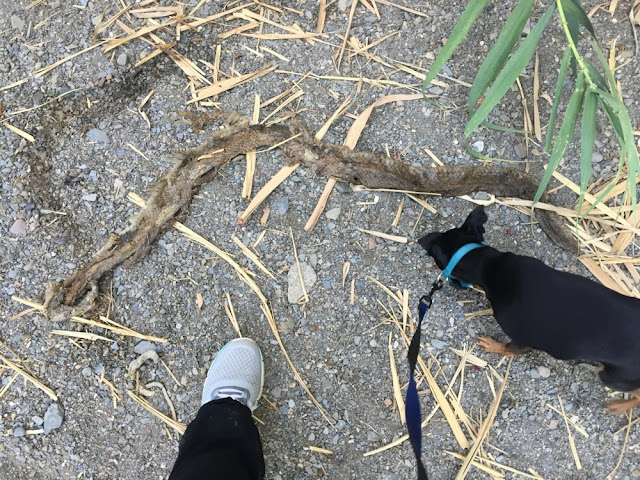 Finally this morning, on our walk back along the beach, I spotted some dolphins swimming not that far out from the beach!!!  I rarely see them because they are quite 'elusive' but today there were at least three of them....oh to have had that camera with me....but you can just see the fin coming out of the water in the blurry photos below: 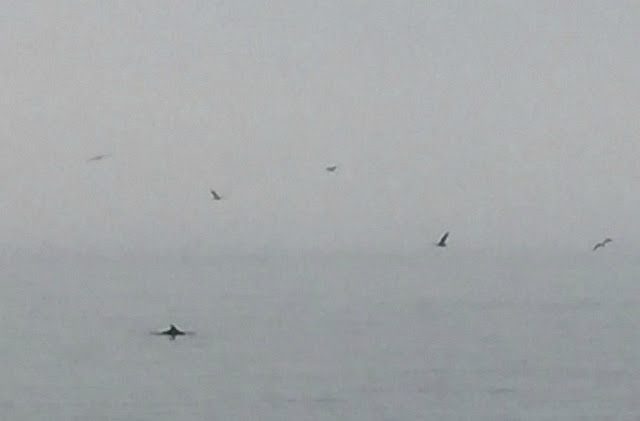 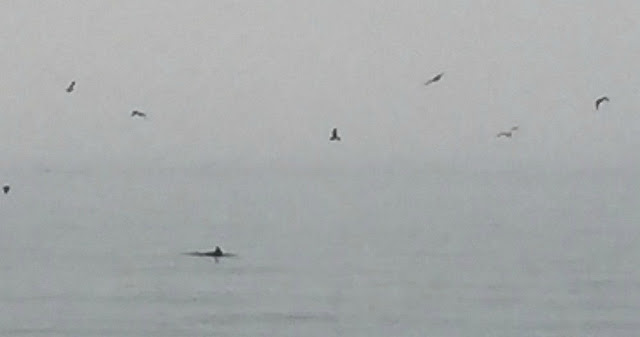 As for the walking, well it is starting to pay off as over the last four weeks I have lost 11 pounds in weight, I'm walking between 5 and 8 kilometres per morning and am actually getting quite addicted to it!  And next week I'm starting Yoga classes!!!!

Finally a photo of the beach at 8pm on Thursday...and yes, the water was lovely!! 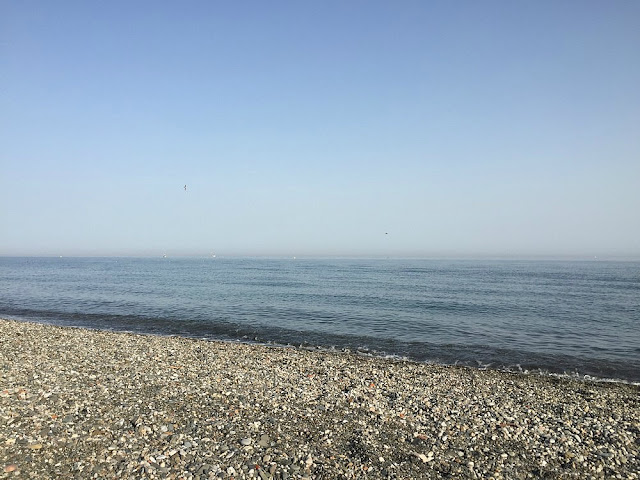 Well I hope you all are having a lovely summer and that the weather is good where you are.  I hope to post more often now and hopefully will remember to lug my camera with me (which will mean that all the local wildlife will take their summer vacations!!!)