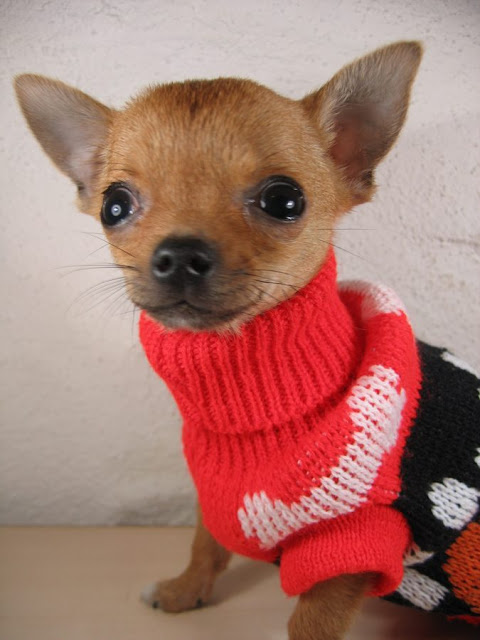 Kara was about four months old when we first saw her.  She sat like a poor little waif in a pet shop window in October 2008, this was when pet shops here in Spain were still able to sell dogs from their windows.  Against our better judgement we went into the pet shop and asked all about her.  It was obvious that the guy working there didn't have a clue about her, but he must have spotted a pair of suckers when we entered the premises!  Well my husband wasn't happy to buy a dog from a pet shop and who can blame him, but as we drove home (an hour and a half in the car) we couldn't stop talking about this little sweetie in the window and how she would fit in with our other three dogs!! 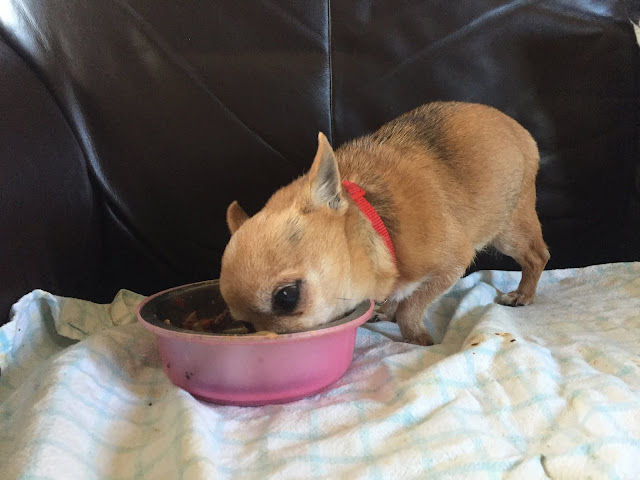 (Kara always ate on the sofa on her own 'tablecloth' (an old tea towel) because she was a slow eater and her sisters would steal her dinner if they could!)

I remember we got home and immediately decided to call the shop and tell the guy to hang on to her, we were coming straight back to get her!  So off we went, another hour and a half in the car and so little Kara came home with us that Saturday evening.  Of course she wasn't called Kara then, she was a nameless little thing, as quiet as a mouse and not much bigger!  Brian, my husband, suggested we call her Kara, after the Supergirl character, Kara Zor-el, and so Kara she became.

We wanted to take Kara straight to our vet for a check up but it was too late that Saturday evening, but as soon as we got her home we realised that something wasn't quite right with her.  First of all her tail had a 'kink' in it, it felt like a 'knot' and it stuck straight out the back.  It didn't worry us how it looked but we didn't want her to have any problems with it.  Also her back legs appeared to be twisted.  Her fur didn't feel as soft as it looked, it had a slight dryness to it but we thought we'd leave it for the vet to look at on the Monday. 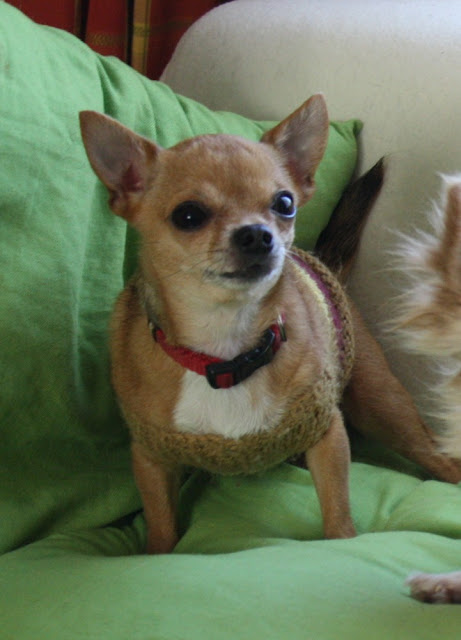 Kara settled in but she was extremely nervous.  She seemed to be petrified of feet, if we walked anywhere near her she would cower down as if she thought she might be kicked....it was not nice to watch but we were determined that she would feel at home with us as she was already very well loved....how could we not love the little sweetie?  She was gorgeous, the sweetest little dog and very cuddly! 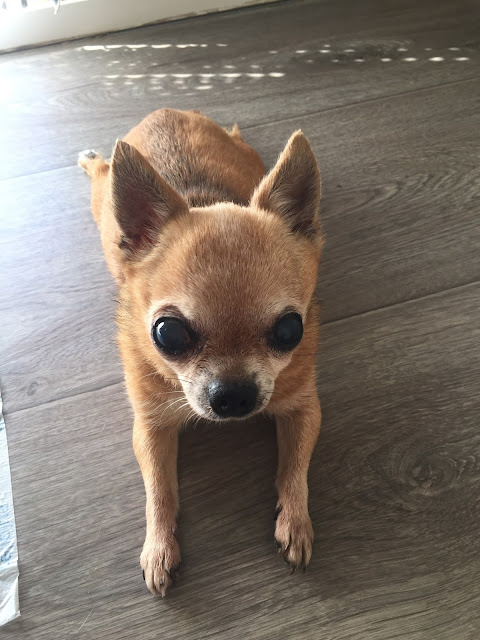 On the Monday, when the vet saw her, she was really angry.  She said that Kara was obviously undernourished, her tail had been broken and not set properly, her back legs were indeed twisted because she actually had rickets.  Our vet hadn't seen a puppy with rickets in  in a long time.  Her fur was dry because she'd not been given the correct food for a puppy of her age. 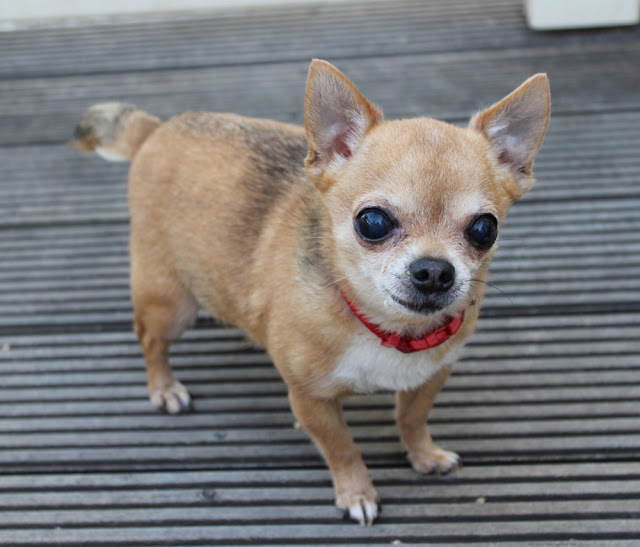 We went home with her and continued feeding her on the food that we'd been giving to our other pups, Lucy and Yoda, who themselves were only 9 months and 7 months respectively.  A week later when we went back to the vet, she could already see an improvement in Kara, her fur was beginning to feel silky and soft and she blossomed from then on.  She continued to have silky soft fur for the rest of her life.

Then a few years later, one Boxing Night to be exact, Kara suddenly started fitting.  I'd never seen a dog having a fit before and it was incredibly upsetting, plus I was so scared that we were going to lose her and what vet would be open at 8pm the day after Christmas?  Luckily, we didn't reckon with my son's future mother in law, who, knowing everyone in our town, got on the phone to a local vet who agreed to see us straight away.  And so little Kara was diagnosed with epilepsy and put on phenobarbitol.

Phenobarbitol is not a drug to be messed with but once we got her dose right, she had less fits although she did continue to have a few a month...however, what we didn't know was that it was affecting her eyesight.  We eventually tried other drugs and reduced her phenbarbitol right down but by then it was too late, her retinas were already beyond help and she gradually lost her sight completely.

At first her loss of sight wasn't that much of a problem for her, she'd never been a dog that liked going out for walks, she was actually a little bit of a Diva and enjoyed being carried about!  But as long as we didn't move the furniture she was fine, she could find the water bowls, she could find her way around without many bumps.  However about a year or so ago I noticed that her behaviour started to be a bit 'different'.  She started to walk around in circles and bark for no reason at all, and it was a 'strange' bark, not a normal one but we didn't really think too much of it at the time.  I asked the vet if she thought Kara might have the start of doggy dementia but she felt that she was too young at that point, so we didn't worry too much. 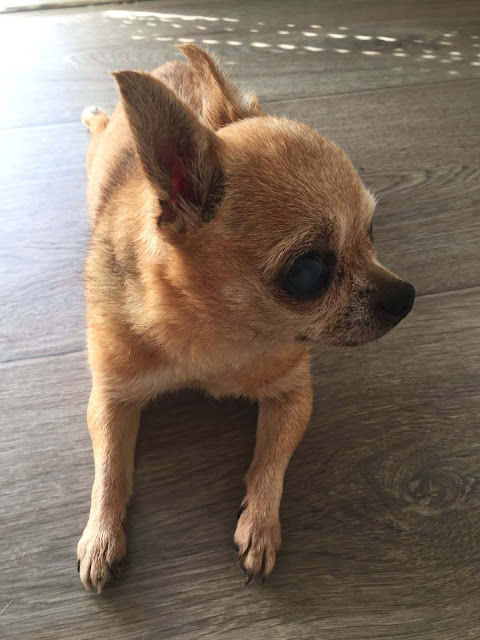 However, by the beginning of this year she started to get worse.  I'd done some research and found out quite a lot about dementia in dogs and she was showing quite a few signs, it was really sad.  As if the poor little thing didn't have enough to contend with, she was definitely showing strong signs of dementia.  The vet gave us a drug that is supposed to help dogs with these signs, called Cognadine, but although it seemed to help at little at first, we soon realised that she was getting worse.  We tried other medications, we tried cannabis oil but nothing really helped her.  She got worse and worse.

In February when my husband was away visiting family in the UK, I was at the end of my tether.  Kara was walking around in circles and continued to do so for about 3 and a half hours.  Every time I picked her up and held her, she would struggle to get down, I would put her in her bed and she would get straight out and off she'd go again with the circling. She also started to bark for nothing at all and this too would go on for hours at a time.

Our vet then suggested another drug that is supposed to help dogs with dementia and had no side effects...we tried this and yes, for a few weeks it seemed to work.  It was increasing the blood flow to her brain and supposed to calm her symptoms down.  But over the last few weeks we realised that it just wasn't working anymore and there was nothing left that we could do for her medically. 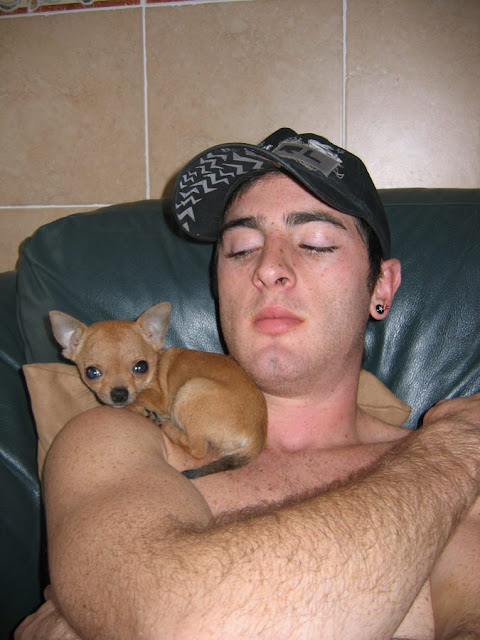 Last week we realised that her time had come to leave us.  She no longer recognised us which was just so heartbreaking and her circling had got so treacherous for her because she couldn't see, she no longer was aware enough of her surroundings to know where everything was and so she spent a lot of time bashing into furniture, it was horrible to watch.  Horrible to see our sweet little girl in such decline.  Physically she looked fine, her fur was lovely and soft, her appetite in the main was good, but her mental state was in such decline.

I cried all weekend after we'd made the decision to let her go.  I felt like I was 'playing God', deciding that her life was over.  But our lovely vet talked with us at length and she is not one to put a healthy dog to sleep or make decisions like this lightly.  She told us that Kara's heart was strong but her mind had completely gone and her life must be scary for her, she didn't know where she was and she didn't know who we were...that was horrible to hear but then the truth often is.

So we said goodbye to her yesterday morning at 9.50am.  We held her whilst she was sedated and we cuddled her in her blanket as she was given the injection and  breathed her last.  My heart feels heavy and my eyes are swollen, but she will always be our little Princess Diva who'll live on in our hearts forever. 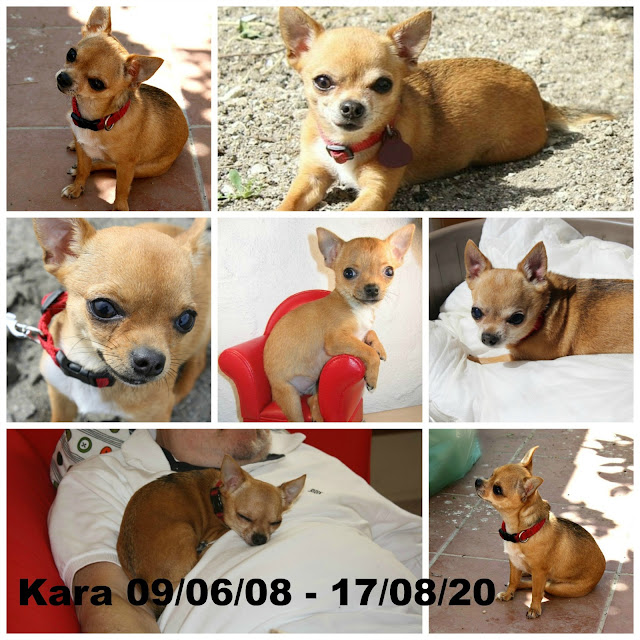 Thank you for taking the time to read this post, I'm sorry it was so long but it's hard to put 12 years of love for a little dog into just a few lines.

Please give your beloved pets an extra hug from me tonight