Today I have been busy sewing again and finished another outfit for little Evangeline, my Iplehouse BID Elin.  This one is also for Etsy.....I'm so enjoying sewing for this little sweetie!

Here is the completed outfit, it consists of a three tiered blue and white skirt, a sweatshirt top with blue decoration and blue and white knit leggings.  I think she looks so cute in it, the colours really suit her lovely tanned skin! 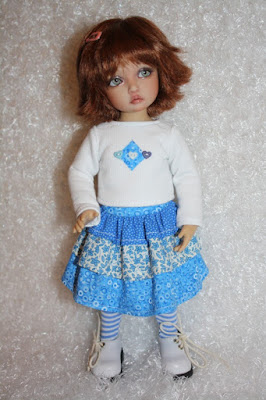 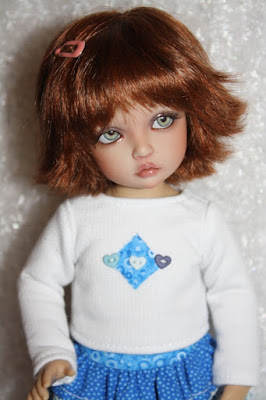 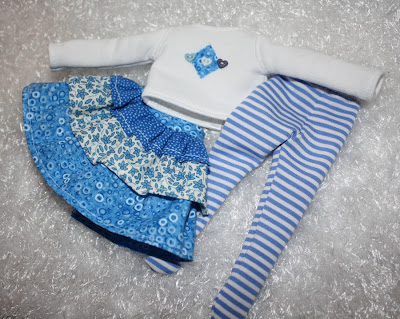 Talking of Iplehouse, today I got a lovely surprise when I went to check on their website.  I'd written to them during the weekend asking about adding something to my order, and their response was that they intended shipping my Asa this week!  I'm so pleased because I only ordered her on the 19th November and so hopefully she will be home in time for Christmas.  I hope that I can leave her box unopened until Christmas Day but I doubt it!  (After all, someone has to check that she is as she should be!!!!)

On the non dolly front, I finished a another really good book yesterday.  It was the lastest Janet Evanovich book, which is number 18 in Stephanie Plum series of novels.  It was great as usual, full of laugh out loud moments.  I read them so quickly though and then I am moaning that I didn't want the book to end!  Is there no pleasing some people, I hear you ask!!  So now I've got to wait until June 2012 for the next installment!  I'm lucky though in that I still have quite a few of her other books to read, so I will fill my time with those.

In the meantime I started another book last night, one which I first read about 30 years ago, when I was just a young thing, travelling up to London and back each day on the London Underground.  It is called The Rats by James Herbert, and I have to say that my taste in books has changed.  For a start I really do not like rats these days (except if they are someones pets) and I really hate blood and gore!  (And to think that I used to work in Scenes of Crime!)  But times change and I've become a lot more squeamish!!!  But I think I'll read to the end of the book now that I've started it, although I'm sure it will give me the willies at night!!!

Apart from that nothing much else to report!  The weather is cold and sunny, quite nice in the sunshine but really chilly in the shade.....and our house, as usual, is freezing, or so it seems to me!!