This week I received a piece of lambswool that I'd bought on Etsy, so I decided to make a wig for my Volks MSD Toppi.  Toppi, who I call Taliah, has been with me since April 2010 and has worn the same wig the whole time she's been here, which is a long straight strawberry blond Monique Gold Paris, I think it is.  So this lambswool one is a complete change and I'm not sure that it'll stay on her for long!

Toppi is my favourite facemould of the Volks MSD (Mini Super Dollfie) releases and was always a 'holy grail' doll for me.  I had wanted one since the moment I saw her photo on Den of Angels, but for a long time I was either pipped at the post on auctions, or just that fraction of a minute too slow when one was put up for sale in the Den of Angels marketplace.  However, one day I saw a Toppi put up for sale on Flickr and quickly contacted the seller who, as luck would have it, lived here in Europe.  I made an offer for her and she accepted and so Toppi was sent on her way to live with me.  I was so excited to be finally getting this 'special' doll.

However, when Toppi arrived I got a real shock.  She was filthy.  The 'lovely body blush' described by the seller, was the most awful thick peach coloured paint which was dirty and chipped and her default faceup with "freckles added but not sealed, so easily removable" were just dreadful.  The freckles were very poorly done and even though they'd allegedly not been sealed, they had stained the original faceup.  On top of all that, if this wasn't enough, she stunk of cigarette smoke.  I was so upset and disappointed but the beauty of ball jointed dolls is that generally all is not lost!  I removed all the body blushing first and then gave her a really good clean with warm soapy water, then because I was unable to remove the stains left on her face by the freckles, I removed the default faceup too.  Then I got her a slot with one of my favourite faceup artists for a whole new look.  That should have been the start of Toppi's new life!

Ha! But all the best laid plans......nothing was destined to go smoothly with this lovely girl.  The faceup artist was suffering from burn-out and finally after about 6 months holding the head but not starting on it, she decided that she was going to send all the heads back undone!  Disaster!  But luck was with me on this occasion and the head was sent directly to Caroline of Viridian House in Scotland, who came to my rescue.  She felt sorry for poor Toppi and said that she would squeeze her in!

The rest as they say, is history!  Toppi really is a gorgeous sculpt, a very simple look but soft and beautiful.  And of course Caroline's faceup work is second to none!   I do think that all the 'trauma' was worth it to get this girl, she really is my Holy Grail doll!!


In her regular wig: 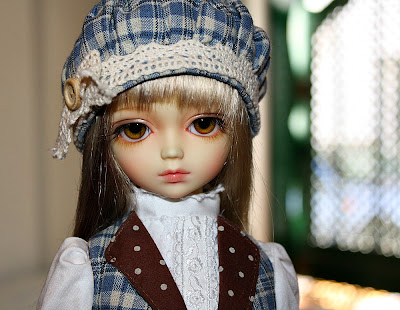 In her new lambswool wig that I made for her this week: 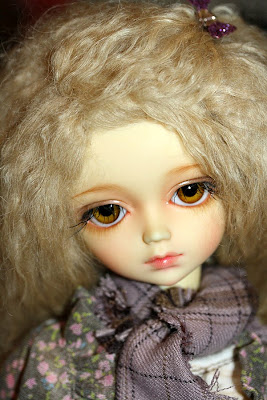 And a close up using my new Macro lens: 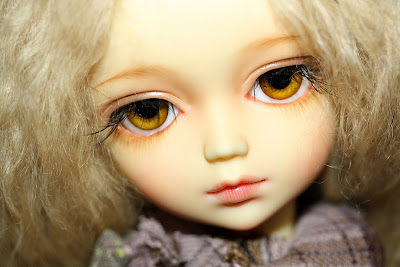