I was very naughty yesterday and bought myself a nice pressie on Ebay.....a little redhead Sasha will be coming to live here with us in Spain!!   I didn't intend getting a redhead at all, in fact I've been mainly looking for a brunette girl but when I saw this girl pop up on my screen and described as a 'waif, looking for a new home for Christmas' well my heart just melted.  I couldn't believe my eyes when I saw that not only did she have a 'buy it now' price, but she also was being sold by the very same lady from whom I bought Devon!

However, in the time it took me to go and log in to ebay, when I went back to look at her again, she was gone....my stomach did a flip of deep disappointment, but then within a minute or so, there she was again!  It must have been my computer testing me to make sure I really did want her.  So I quickly hit the 'buy it now' button!!!  I know she will be just perfect for me because she has been well looked after.

The 'Sasha purists' might say that I was mad to buy her, she is a later girl from 1979 and has had her lovely red hair cut into a bob by her previous but one owner, but I'm afraid, despite everything I've been told by Sasha people and everything that I've read recently, when I saw her little face looking out of the screen at me, all that information and advice just flew straight out the window and was washed away in the rain!

I guess my heart overruled my head, but I'm happy!

I already have a personality in mind for her and her name will probably be either Willow or Ellory and would you believe it, I even have those very same dungarees!  And they only arrived yesterday too!!  See...it was meant to be!


Here she is, not my photo, but hope the seller won't mind me using it! 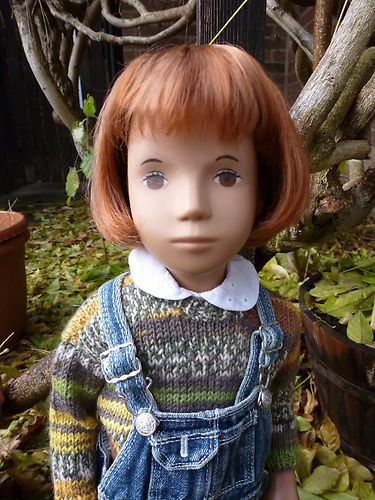