Back from Blighty :) And a Halloween Bar-b-que!

Monday afternoon I arrived back home after my 11 days away in the UK.  I have to say that I had a lovely time, caught up with some old friends, finally met some people that I've previously only 'met' on-line and also met some super new people that I'd never spoken with before!  Of course I also spent some quality time with my mum and my brother John. So a really great holiday!!!

I was going to post photos of one of the highlights of my trip, the Chat n Snap, so well organised by Dee of Sasha Village, her husband Paul and their happy and talented band of helpers....however, having seen the photos from everyone, mine aren't so great so I don't think I'll do that yet.  Instead I will add other photos from my trip, and they'll be in no chronological order....in fact the first ones will actually be from last Friday, when we attended a Halloween Bar-b-que at the Day Centre my brother attends, organised to help raise funds for a new minibus.

(The photos were taken with the kind permission of the staff and clients, I don't recall all their names so will just add Christian names if I know who they are :) 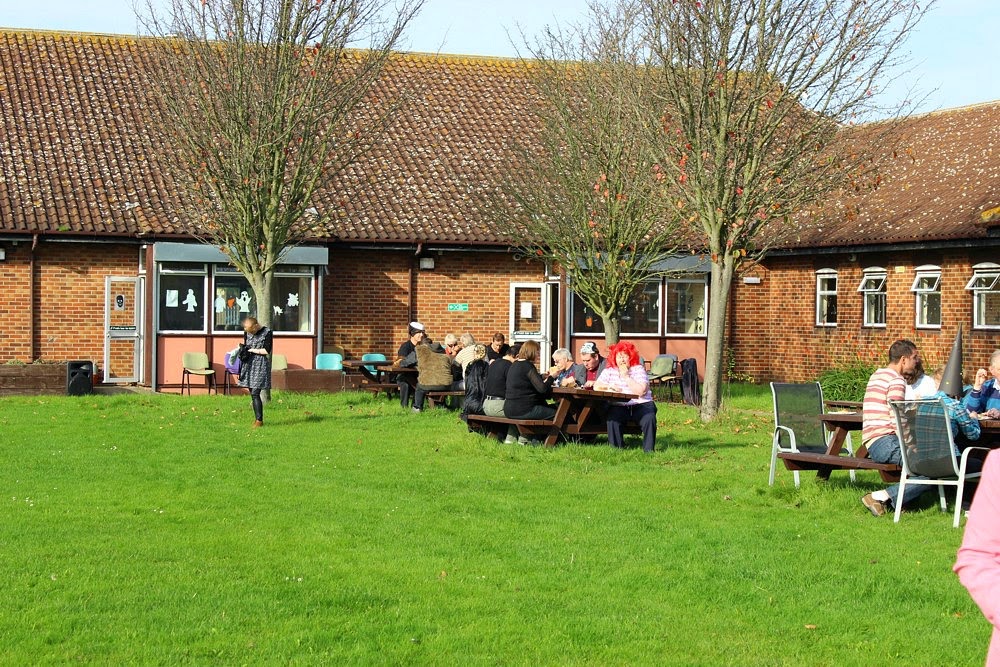 The day was beautiful, really mild and sunny for the end of October and so we were able to sit outside.  The clients and staff really got into the spirit of the occasion by dressing up in fancy dress...there were some very scary ghouls, vampires, witches and wizards, amongst other great outfits!  I even spotted an Elvis hidden in there!  My mum and I didn't dress up (although some of you might say otherwise ;) ) but my mum spent hours making and decorating more than 60 cupcakes to take with us. 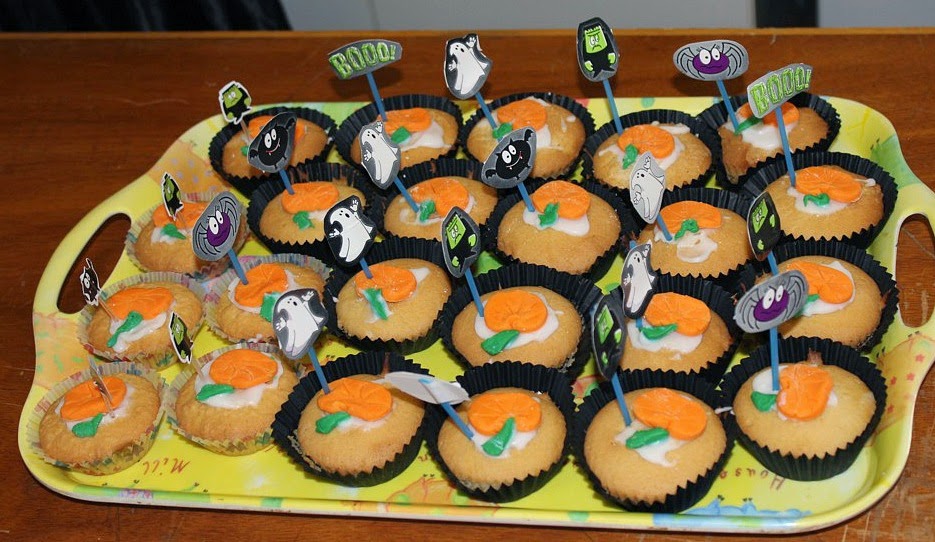 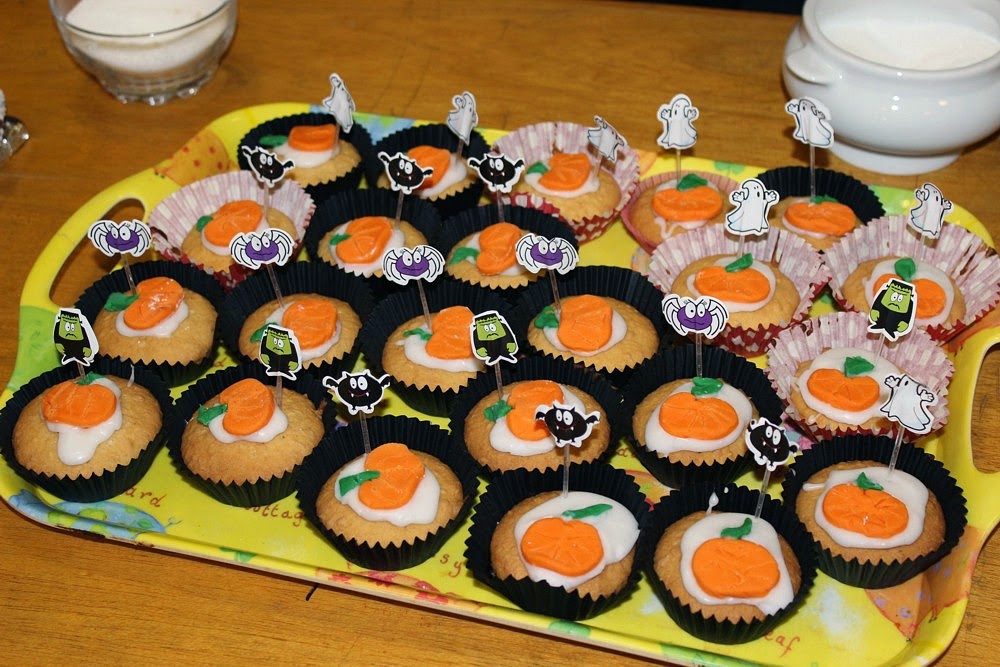 The lunch was very tasty and perfectly cooked on an outside grill by several members of staff.  We had hot dogs, burgers in rolls and jacket potatoes, salad, cheese and coleslaw.  We also had the most delicious homemade soups, pumpkin or vegetable.  Both were lovely, definitely the best veggie soup I've ever tasted and the pumpkin was great, so much so that I'm going to try making it myself!


Here's my mum and my brother John enjoying their lunch.  I'm not sure what my brother is dressed as, he has an eccentric style all his own! 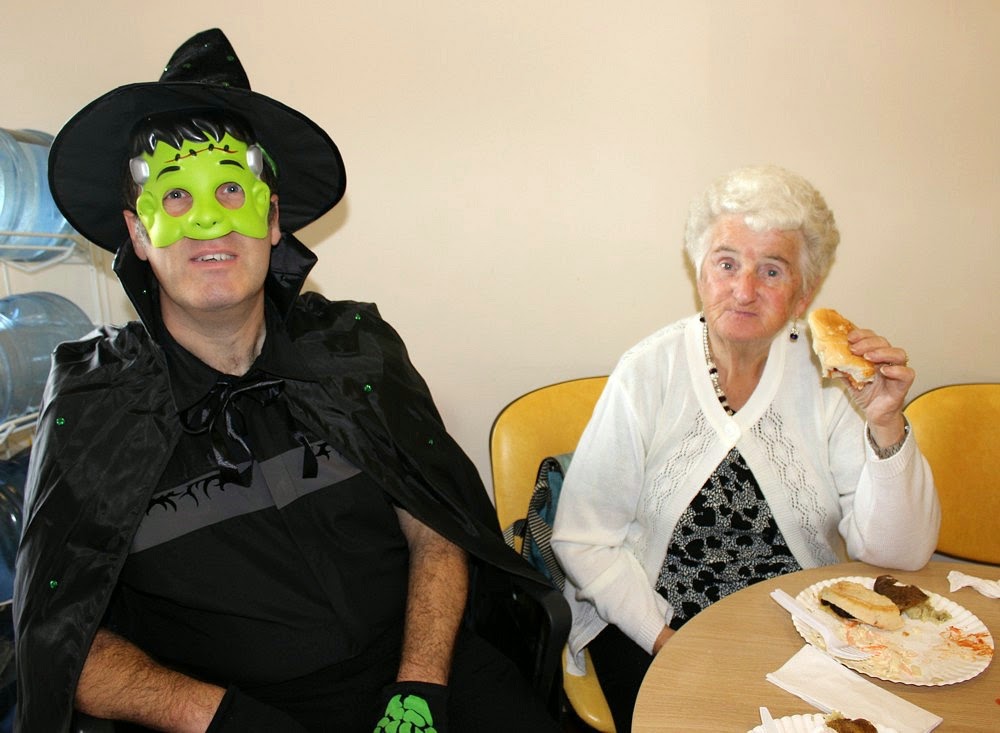 Back outside, here is John again with one of the members of staff, sorry but I don't recall this man's name!!  **** Update - this is John the Caretaker apparently! **** 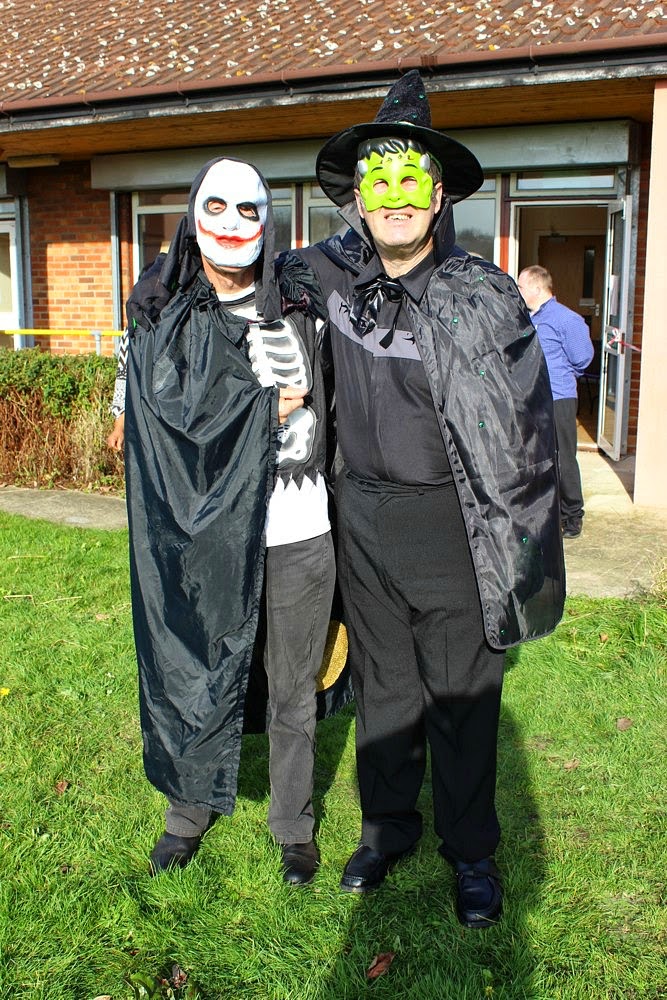 Jonathan decided to join us at 'our' table....I've known this young man for many years and was admiring his super tee shirt....which apparently he got in the US for a bargain price!  Lucky fellow! 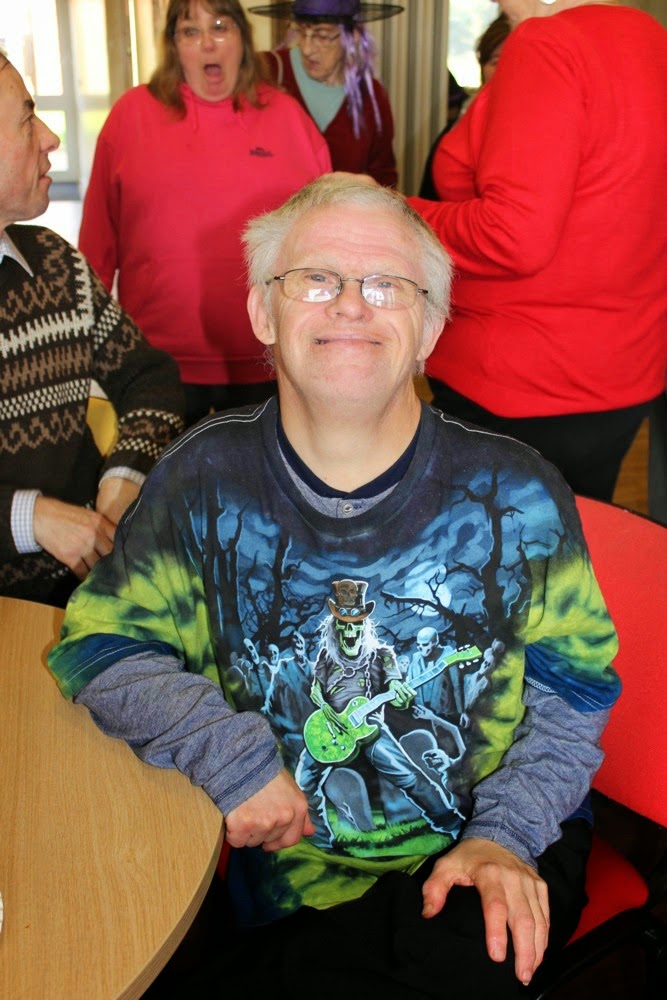 Here's John again with another member of staff, I'm afraid I forgot his name too but do recall he was a nice young Italian chap!! ;)  That mask is pretty horrible though!!  Italian or not, I'd not want to run into him on a dark night, if he was wearing that ;)  **** Update: this young man is called Tony! **** 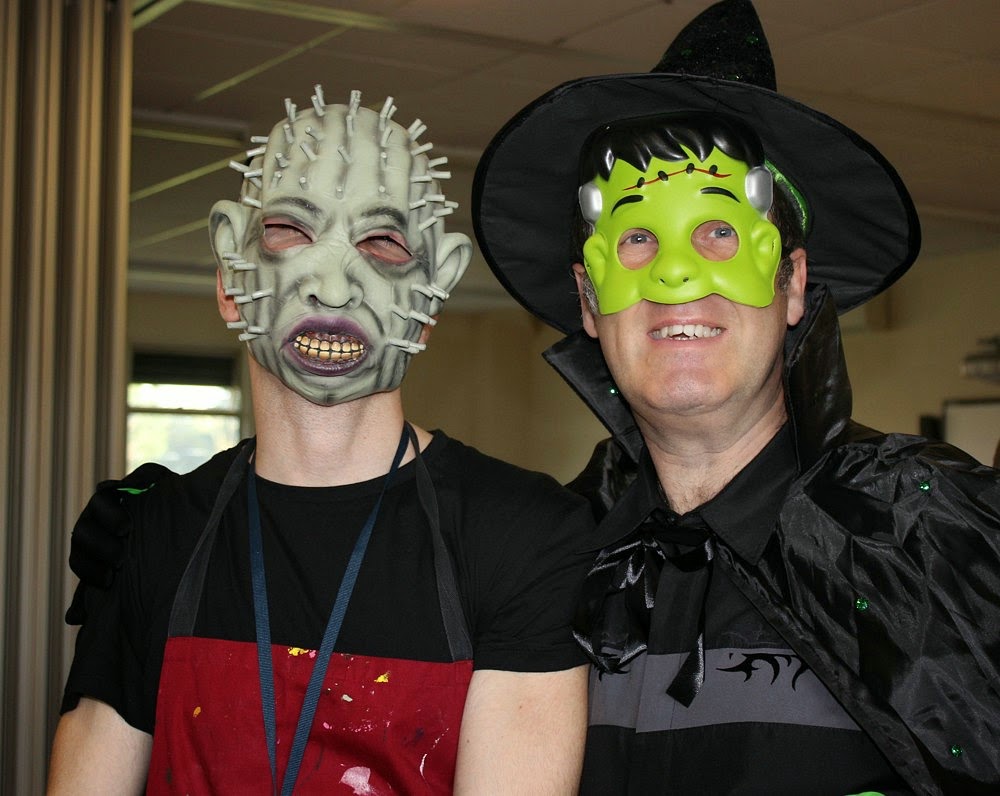 You'll have gathered by now that my brother loves to have his photo taken!!!  Here he is again with his friend Tom who was wearing this brilliant, and scary, werewolf mask!   This was the first time I'd met Tom and he told me that he'd "heard all about me!"  Thankfully he added "all good!" Bless him! ;) 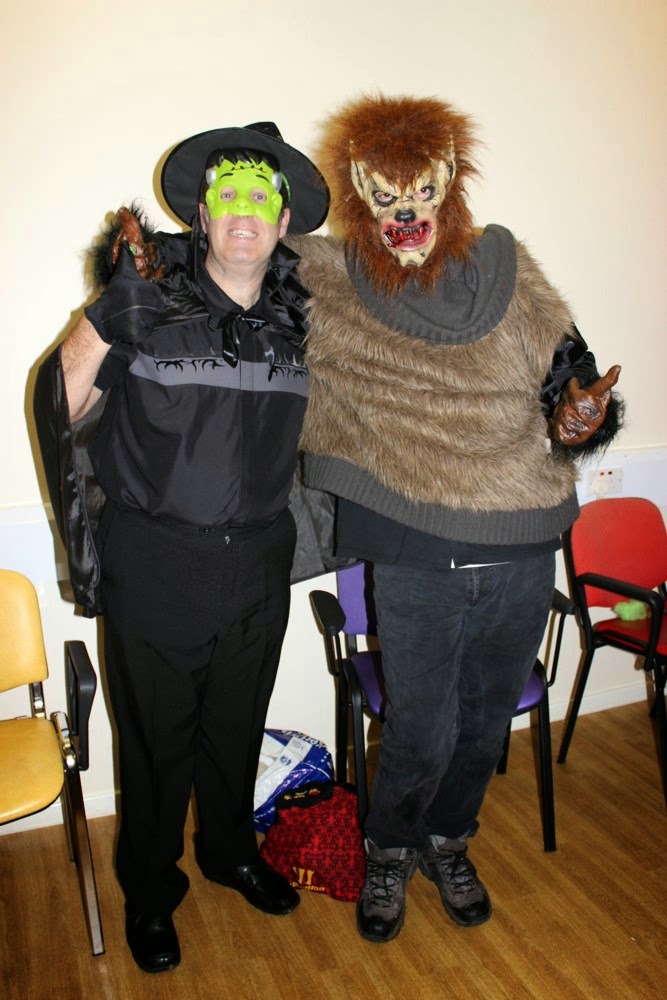 This young man, another client, asked me to take his photo.....I do know his name but have forgotten it, if it comes to me I'll add it here later.  ***** Update: after describing this guy to my mum over the phone, I'm told it is Paul **** 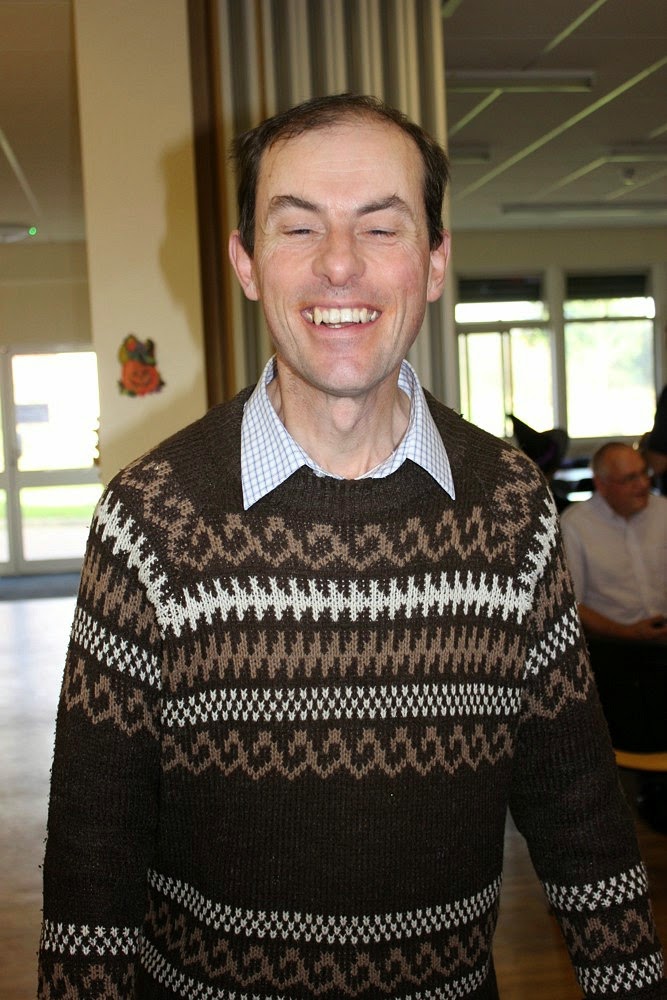 Members of staff, dressed as witches, serving guests with a plentiful supply of tea and coffee....and Halloween cakes too of course!! 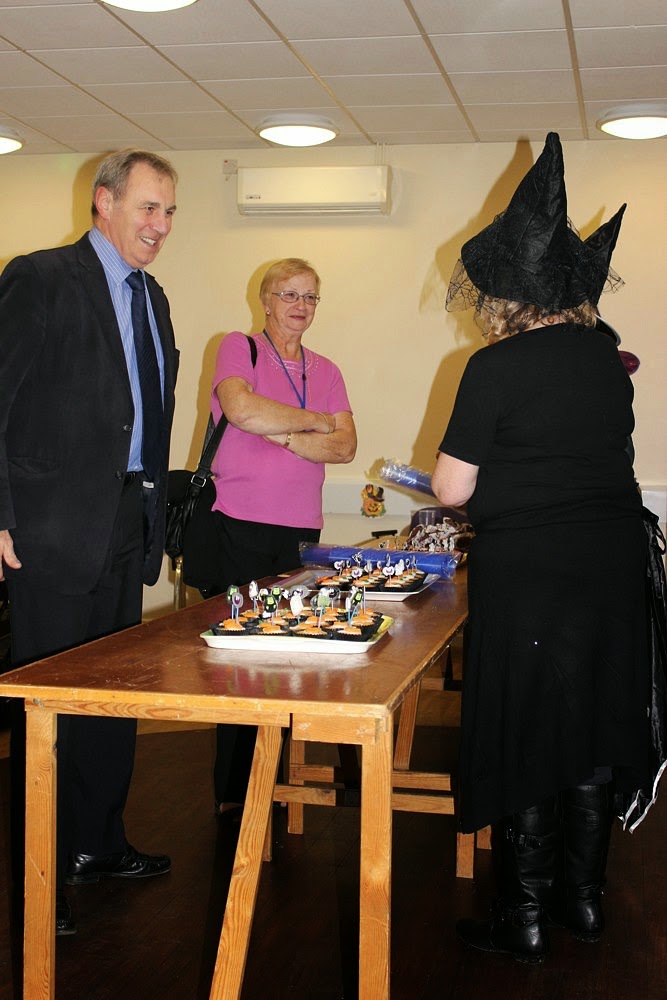 This "Two Faced" apparition is Karen, a lovely lady who works at the Centre.  How she kept this extra head in place all day amazed me!!!  I had to laugh when I realised that as I was talking to her, so I was turning from one head to the other, so as to 'include' both of them in the conversation! DOH!!

Had to include a few photos of things I saw around the Centre, this handsome chap wasn't dressed for Halloween though.  I'd have loved to bring him home with me, wouldn't he make a great model in my doll/sewing room?!  Not sure I'd have been able to fit him in my suitcase for the journey back to Spain though!! 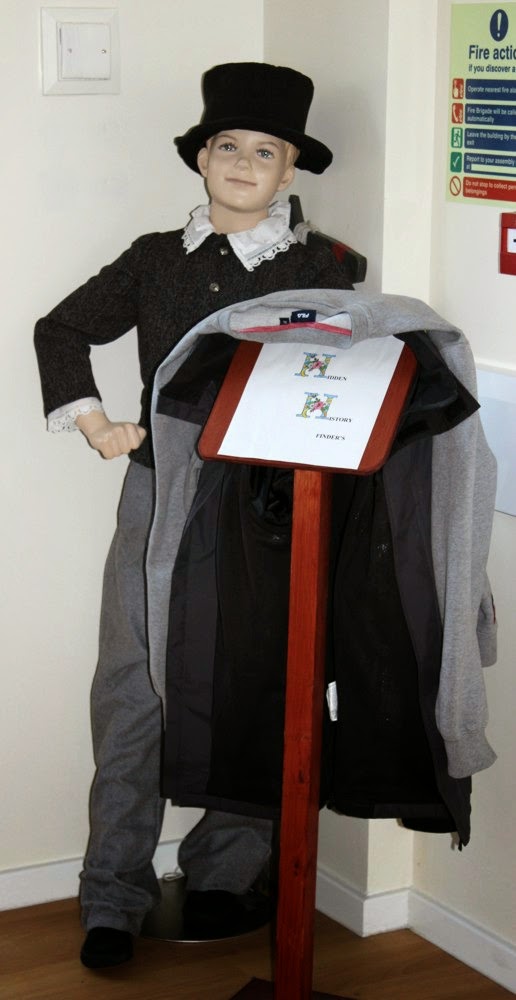 I liked this hand written sign I saw on the wall of one of the rooms! (No, I wasn't snooping around the rooms, a member of staff told me to go and look at the displays, so didn't want to miss that opportunity!) 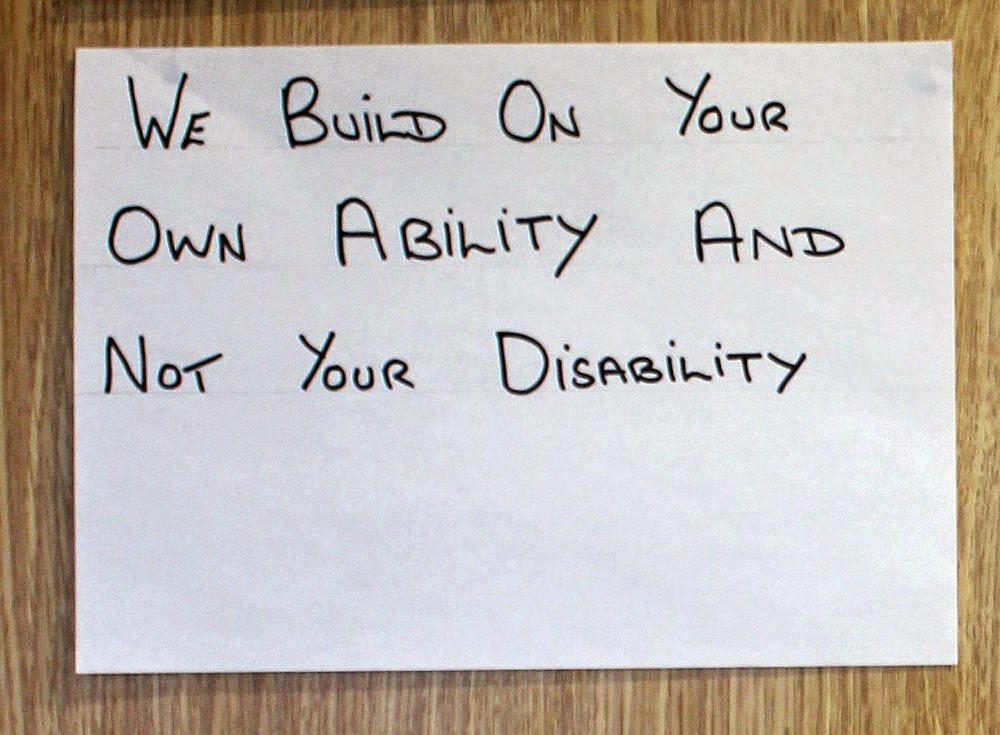 And a nice, thought provoking poem written by a member of staff: 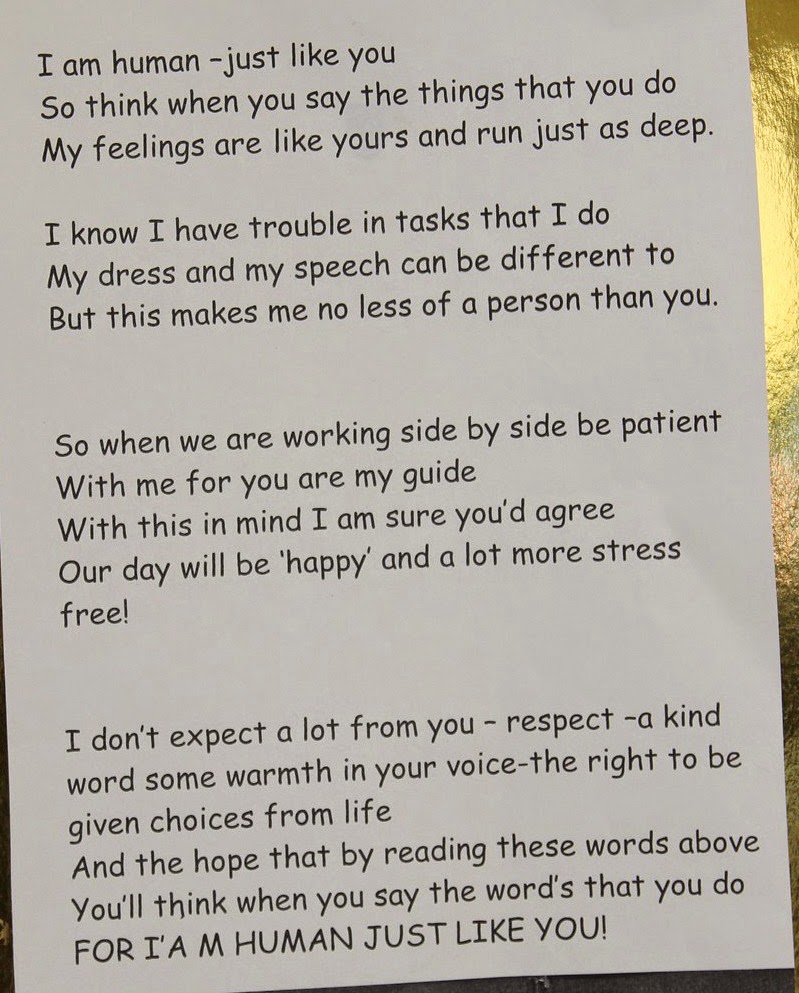 Back to the main hall and here's Elvis!!!  Or could it be one of the clients in disguise perhaps? 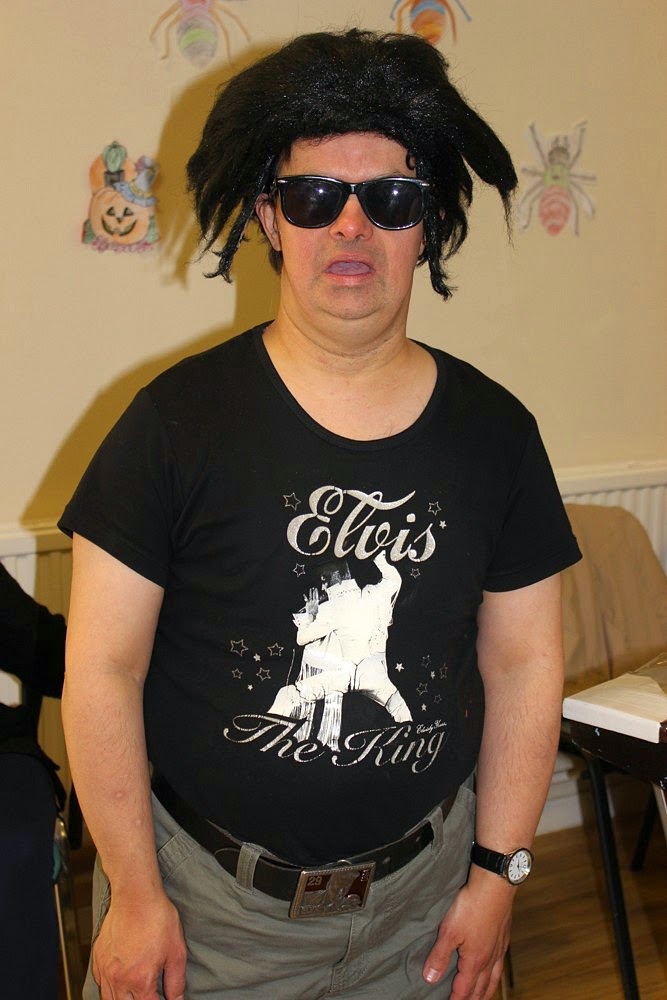 I think client Alan is as bad as my brother, he asked me several times to take his photo!! 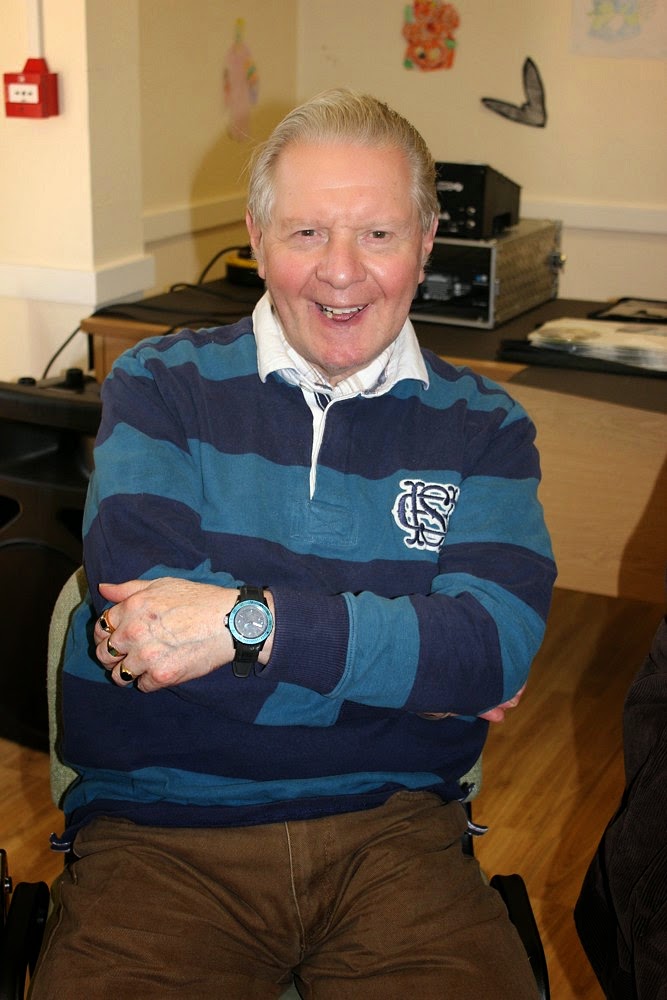 After the BBQ everyone went back to the main hall where there were raffles, face painting, competitions and a disco.  One competition was to "guess the weight of the pumpkin".... the pumpkin was actually grown by the clients as they grow LOADS of different vegetables.  I don't recall the exact weight but it was a little under 10 stones!!!!  That is one BIG pumpkin! :)

A bit of boogieing going on here: 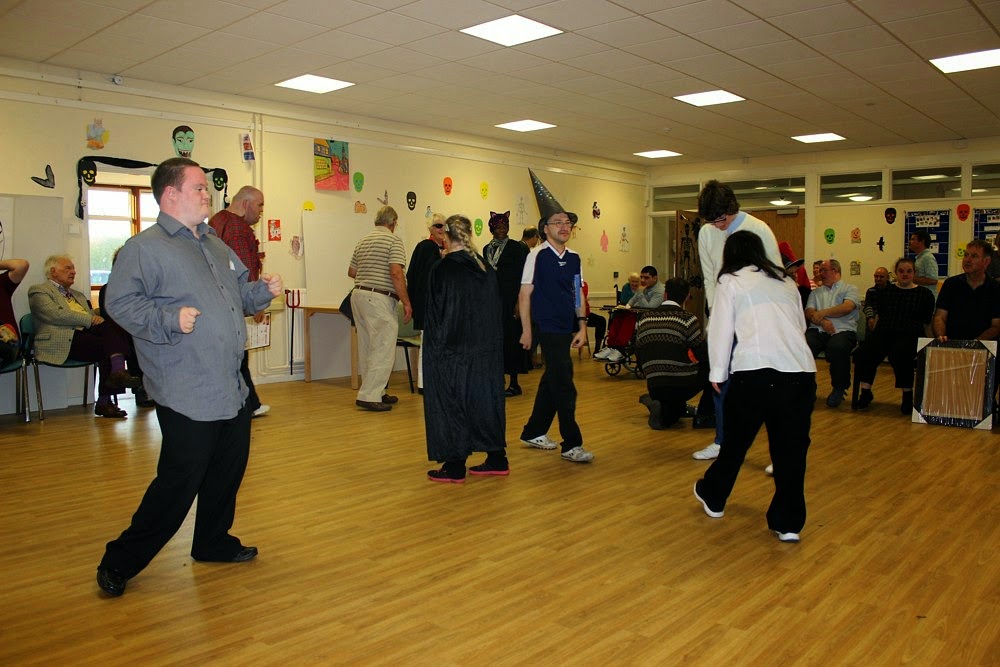 I believe this young lady is Melissa, she enjoys having her photo taken! 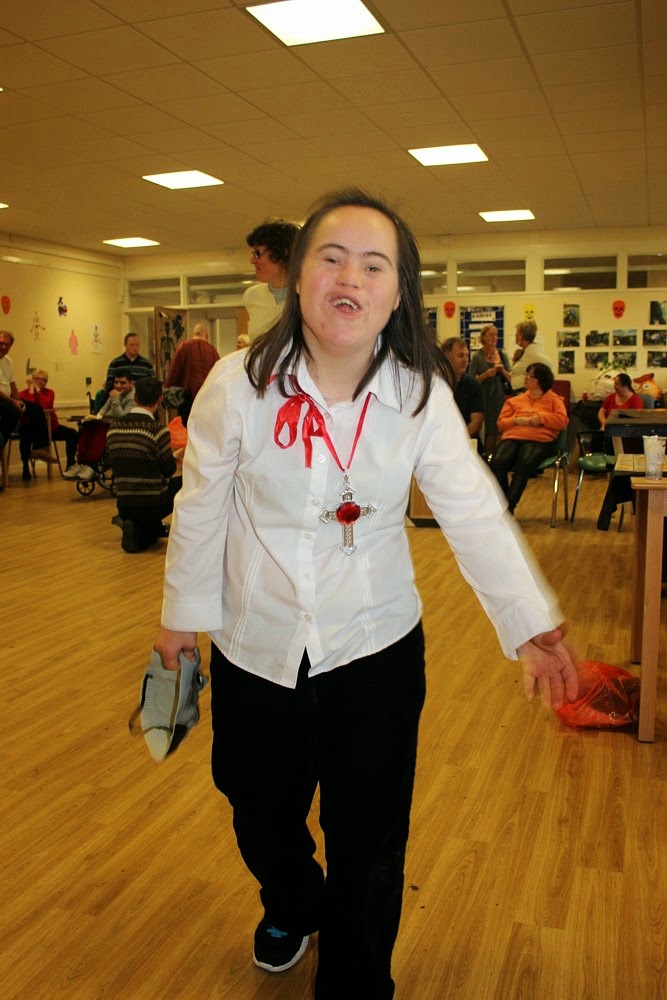 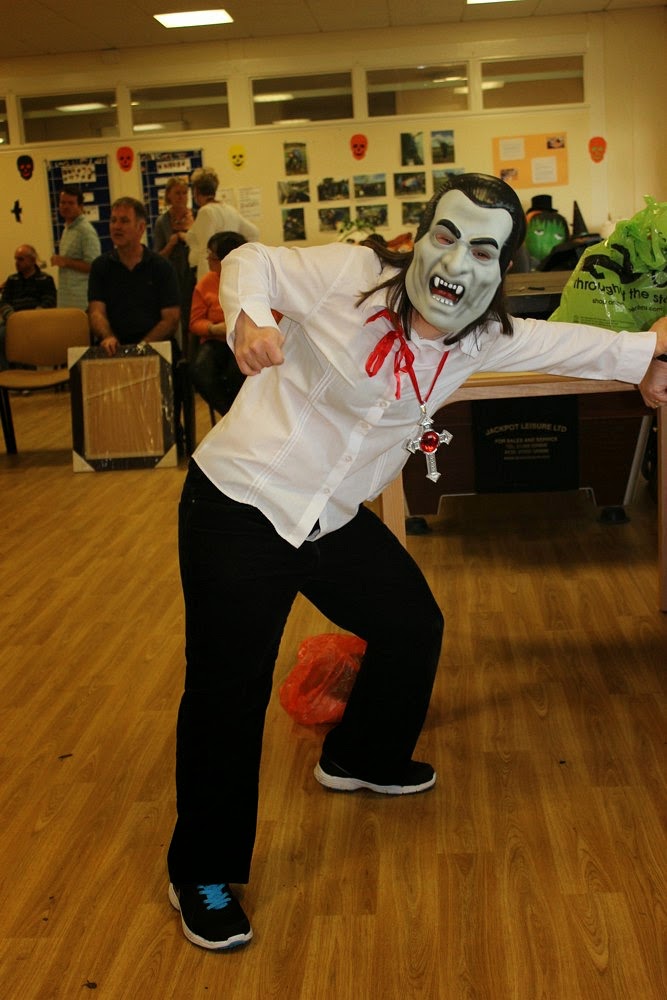 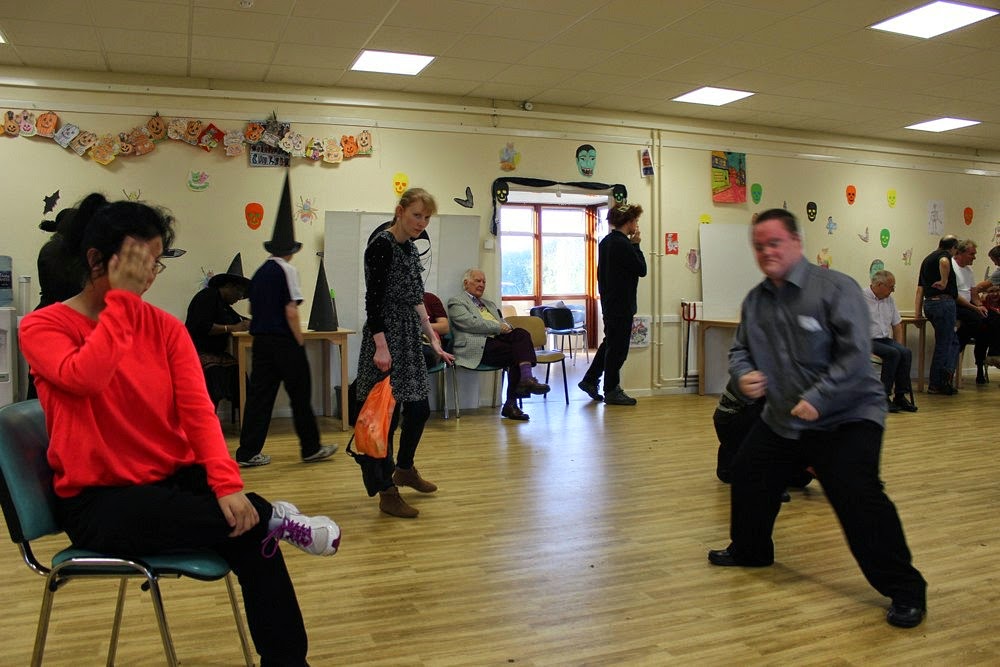 A bit of a 'waltz' happening here between client Melissa and a member of staff....whilst in the background a purple haired witch sits and watches all the fun :) 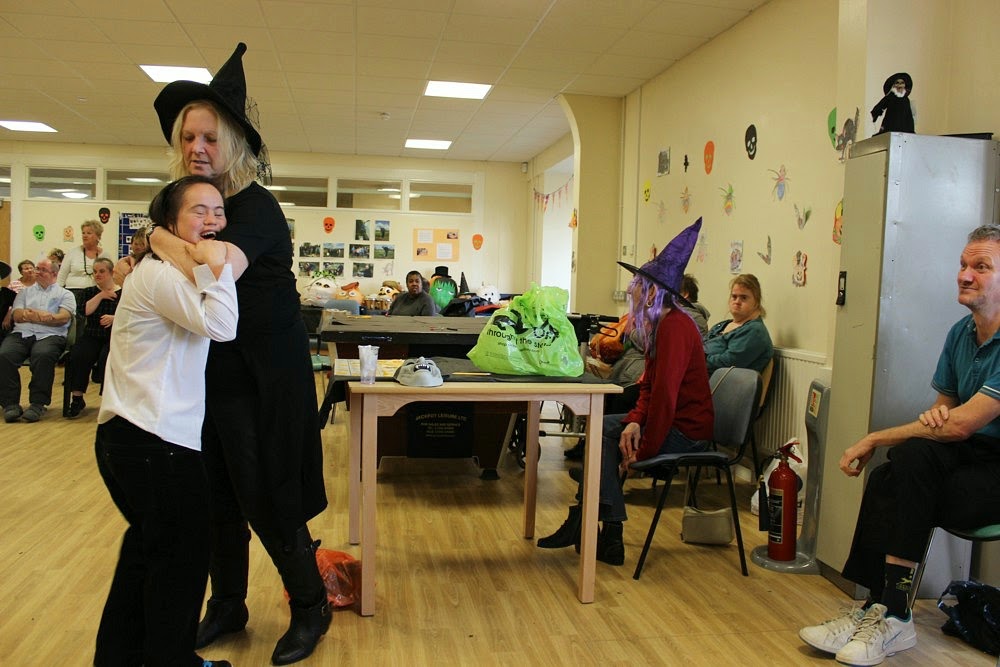 John's still smiling, though maybe my mum by now is feeling the effects of having stood making and decorating Halloween cakes for hours the day before! 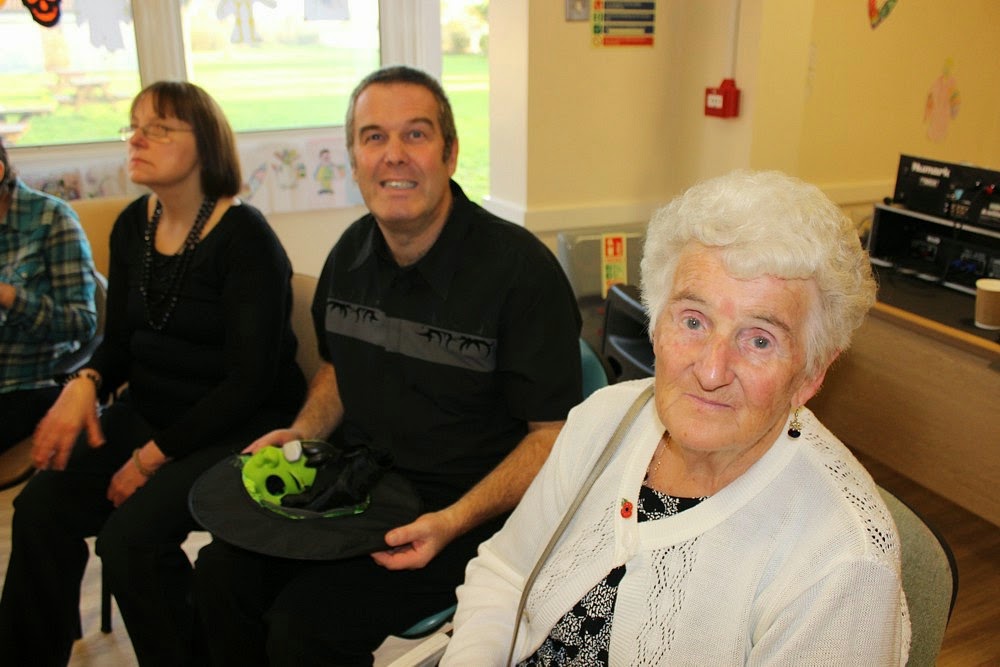 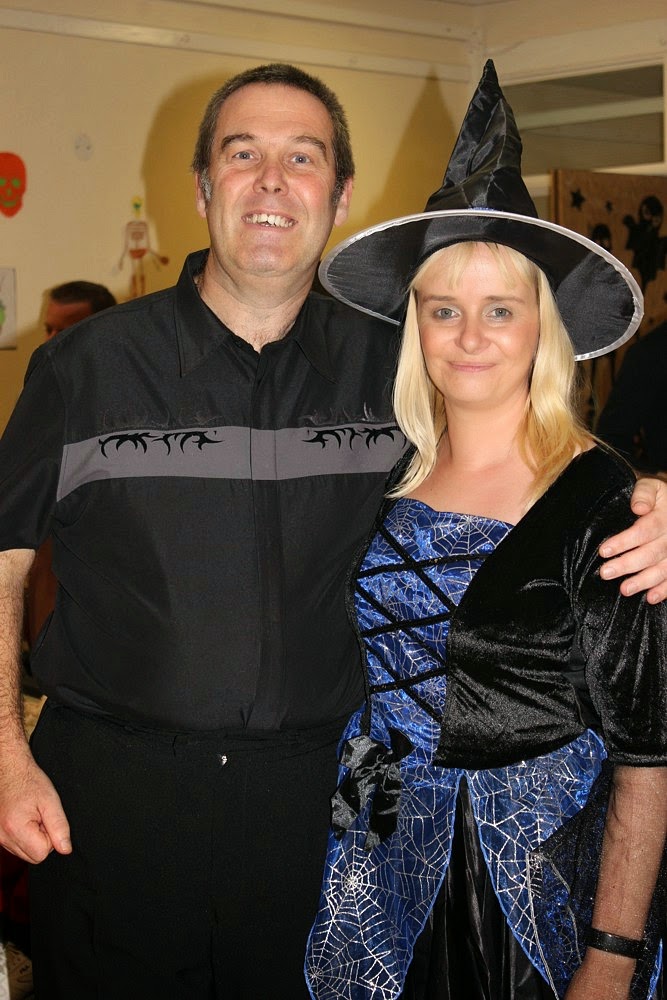 We had a really great afternoon, and Lea, if you read this, I hope you'll pass on my thanks to everyone for letting me take their photos and for making us so welcome! :)
Posted by Sharon at 22:22