I thought I'd try and catch up with my blog whilst I could because every day for the last week and a half I have been having problems with my laptop and connecting to the internet.  It seems particularly bad during the afternoon and evening, the evening being the time when I like to catch up with 'proper' emails and my blog in particular.  I have run several diagnostics and my hubby has also been checking too, and because the problem only seems to affect me, he feels that it could be my 'wi-fi' card....I think that's what he said anyway!  Unfortunately, although he is great with computers, he doesn't like to fiddle so much with laptops, so I will probably have to seek out someone down on the coast to have a look at it as soon as I can.

So please forgive me if I've not commented on your blog, or for not writing much on my own.

So while I have this little bit of 'connectivity' this morning, here I am catching up!

I just got a couple of packages in the post.  One of them is the hair that I got from Retro Dolls in the UK to reroot the fringe of my little redhead Sasha.  Unfortunately, the two colours I chose are not a good match now that I see them in real life.  I chose Red Deer and Auburn Spice, both lovely red shades, but I now realise that she is more towards browny auburn than these two shades appeared on my laptop screen.  I don't know whether to go ahead and give her a cute multi-coloured fringe or send the two packs back to Retro Dolls for different shades.  I know that they will match up colours for you if you send a piece of the existing hair colour, but I'm very reluctant to snip any hair from her head to send.  I will have to give it some thought.

And the second package was from my friend Sue in the UK.  She had a duplicate red wig that I liked and was going to buy, but she said I could have hers as she didn't need the two!  Also inside the box were 6 bars of Cadbury's Finger of Fudge!!!!  Sue knows these are my favourites and often sends me some.  Last time she sent me "a full hand" of 5 but I joked that I originated from Canvey Island (I don't but it was worth a try) and that there, with all the inbreeding, we had 6 fingers.......(again not true but it was a means to an end!!!) and so today I find not 5 but SIX Fingers in my package!  What a lovely friend she is!!!!

A couple of days ago I received the Mini Fee Karsh that I'd traded for with a friend of mine in the Netherlands.  Unfortunately, although the Karsh faceplate is really lovely, it isn't for me...it is a lot more masculine than I expected, so I have sold it to a lady in Germany.  Hopefully she will pay on Friday and I can get that off to her soon.  So now I have a headless Mini Fee girl body and no head for her...poor thing!  I will have to keep stalking the marketplace on Den of Angels in the hope of finding one I like!  I hate having 'floating' heads and headless bodies hanging around, so I really hope I find something soon!

And so this doesn't end up just a whole bunch of ramblings, here is a photo of my tiny bjds as of today!  The only one in this size range that is missing from the photo is my Kaye Wiggs tanned Tillie who prefers to hang out with the bigger girls! 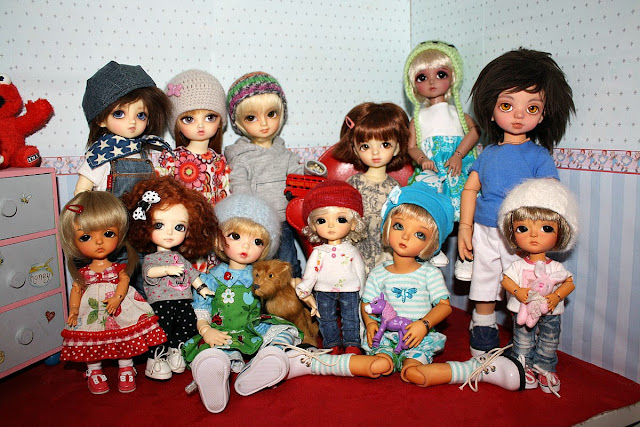