This morning I finally finished my Blythe reroot in baby pink saran!  It is the second scalp reroot that I've done but my goodness it has taken me much longer than the first one.....I don't know why, I did it exactly the same as the first one.  Maybe with Christmas in between starting and finishing, I've been a lot slower.

Anyway, I glued it on but afterwards it fell off!  I think I need to use something other than PVA glue perhaps.  At least though I got an idea of the colour on my Blythe Border Spirit, Candy, who I customised a few months ago.  Her original hair was blond but it was a very yellowy blond and I wasn't keen on it....so I dyed it using Dylon but it came out too dark...it was more of a raspberry pink than I wanted.  So I decided to go the full 'hog' and do a reroot.  I got a new rubber scalp from Cool Cat, then I got my baby pink saran hair from Retro Dolls in the UK and took it from there.

Tomorrow I will reglue the scalp to her faceplate and not be so impatient this time and leave the elastic bands in place for longer.  I then need to do the thatching on the centre part.  I am going to give her a fringe because I don't really like my Blythes without, I think their faces are too round and large for that look.  And then finally I'll cut the length.  I hope I can get it all done tomorrow but I don't want to rush anything.

Candy was not a happy bunny when I took these photos.....the indignity of those elastic bands...not to mention the discomfort!!!! 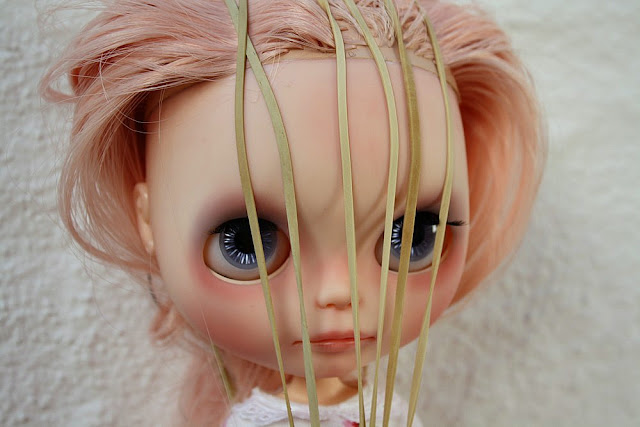 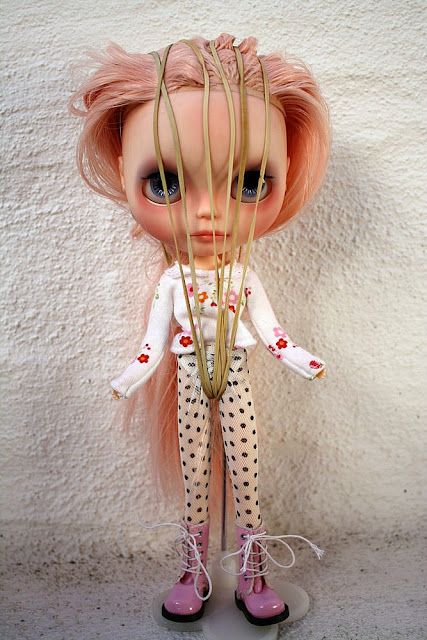